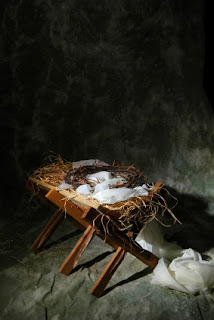 [If you find this homily useful and would like to use it at your Christmas Eve Service, you have my permission. Mike]
For Us and For Our Salvation
Luke 2.1-20
(Here's the audio file)

One of the disheartening trends of our day is that everything – every action, every literary work, every religious expression, every relationship, etc. – Is being viewed as some kind of power struggle. Even in the Da Vinci Code, Dan Brown brings out this charge against Christianity: “It was all about power.” Maybe this will surprise you, but Brown’s right – It was all about power. And we Christians have believed this from the very beginning – God’s power poured out For Us and For Our Salvation!
---
The Contrast:
Caesar – Stepping up to rule from above. 2.1-3 – power to move whole people-groups. Augustus was the adopted son of Julius Caesar. Became the lone ruler of the Empire after a bloody civil war in which he defeated Mark Antony. He turned what was once a republic into an Empire with himself at the head. He proclaimed that HE had brought justice and peace to the whole world. He declared that his adoptive father, Julius, was now a god, and thus made himself son of a god. Poets sang songs about this golden age. Historians spun out stories about how he brought Rome to its climax of greatness. The people called him “savior” of the world. He was acknowledged to be the world’s lord. And many of his people, in the eastern regions, worshipped him as a god. That is the world of v.1-7.

Christ - Stepping down to raise us up with himself! 2.4-20. Here, off in the far-edges of the Empire was born a little boy who was declared by the angels to be God’s one and only, unique, unrepeatable Son (“the angel answered [Mary], “The Holy Spirit will come upon you, and the power of the Most High will overshadow you; therefore the child to be born will be called holy—the Son of God” 1.35). Here, well out of the conscious thoughts of the Emperor was born a little fellow whom the heavens announced was Israel’s long-awaited Messiah and the world’s true Lord (“For unto you is born this day in the city of David a Savior, who is Christ the Lord” 2.11). But unlike Caesar, who clutched and fought and fumed and clenched for the heights of power, fame and honor – this one came in low; born to a young gal whose only real claim to fame at this point is that she loved God (“Behold, I am the servant of the Lord; let it be to me according to your word” 1.38); born into a gruff, blue-collar woodworking family that had to submit to the Caesar; born in a barn, laid - surprisingly - in a feeding trough for a crib. So, it was all about power, huh? Yes, it is about power; God’s own humble power. For this Jesus is none other than God Himself – the one, only, true God. So what is God doing in a Bethlehem barn? What’s He doing helpless in the hay? What’s He doing – dressed in diapers? Why did He come into our world through the trauma of blood and water and birth canal? Why not majesty, glitz, iron-fisted strength? Because this God is pouring out his power for us and for our salvation! And that is exactly what the Bible says – over and over and over and over again. 2 Corinthians 8.9 and Titus 2.13-14. The Lord became the Loser so that He might become our Liberator! The Sovereign gave himself – from conception to crucifixion - as the sacrifice that he might rise up as our Savior! Mark 10.45. Yep, it was all about power: God’s power poured out for us and for our salvation! Not only is He Immanuel, but He is also Jesus.

Therefore, it’s good and proper for us to respond, to raise high our voices with the angels to praise God (“And suddenly there was with the angel a multitude of the heavenly host praising God and saying, “Glory to God in the highest, and on earth peace among those with whom he is pleased!”” 2.13-14); to make a big deal of the good tidings of great joy - “For unto you is born this day in the city of David a Savior, who is Christ the Lord” 2.11. And to hastily run with the shepherds to the Almighty God who pours out his power in Jesus – for us and for our salvation! And while we’re kneeling there in stupefied awe - befuddled amazement – let it all blow you away and then let it re-glue you in a new way. “Therefore, as you received Christ Jesus the Lord, so walk in him, rooted and built up in him and established in the faith, just as you were taught, abounding in thanksgiving… For in him the whole fullness of deity dwells bodily, and you have been filled in him, who is the head of all rule and authority.” (Colossians 2.6-7, 9-10).

Almighty God, you have given your only-begotten Son to take our nature upon him, and to be born of a pure virgin: Grant that we, who have been born again and made your children by adoption and grace, may daily be renewed by your Holy Spirit; through our Lord Jesus Christ, to whom with you and the same Spirit be honor and glory, now and for ever. Amen.
Christmas Eve Homily Luke 2.1-20