"The Challenge of Jesus" by N.T. Wright. A Review 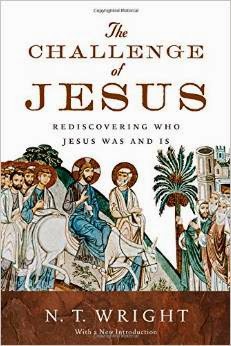 The Challenge of Jesus: Rediscovering Who Jesus Was and Is

For a Presbyterian minister in Oklahoma to review a book by N.T. Wright is similar to a little league short stop trying to give pointers to Cal Ripken or Derek Jeter. It’s comical at the least; and borders on delusions of grandeur at the worst. If there’s anything Wright doesn’t need it’s another book appraisal. After writing over thirty volumes of varying sizes, numerous articles, a New Testament commentary series, plus being consecrated as Bishop of Durham, and now appointed as professor of New Testament at St. Andrews in Scotland, Wright’s name is well known by pastors, seminarians, and lay folk, whether Catholic, Orthodox, Protestant, Liberal, Moderate or Evangelical. Nevertheless the opportunity has arisen, and taking on something of a fool’s errand, I make bold to assess Wright’s 207 page paperback, “The Challenge of Jesus: Rediscovering Who Jesus Was and Is.” Originally published in 1999, it has been repackaged by InterVarsity Press with a new Introduction by the author where he clearly affirms the original content in the book, taking nothing back.

The eight chapters of “The Challenge of Jesus” flow out of various lectures presented in the later part of the 1990s and then were reworked for a larger reading audience. The greatest benefit of the book will be mostly for those who have only heard of Wright but never delved deeply into his writings. This material is a good place to cut one’s teeth, to get a sense of what Wright is up to and where his other books are heading. It’s mildly academic, but easy to read and grasp.

Wright’s stated agenda in “The Challenge of Jesus” is to “go deeper into the meaning” of Jesus, his world, his mission, his vocation “than we have before and to come back to a restatement of the gospel that grounds the things we have believed about Jesus, about the cross, about the resurrection, about the incarnation, more deeply within their original setting” (17). The author correctly recognizes that the Christian Faith is an historical Faith and that if “Christianity is not rooted in things that actually happened in first-century Palestine, we might as well be Buddhists, Marxists, or almost anything else” (18). This, then, is the tenor of the book: to investigate Jesus within the historical texture of first-century Palestine. He examines from within that context what Jesus’ message about the kingdom of God would have meant; the kinds of unsettling connotations his symbolic actions and teaching would have had on his contemporaries; the things the crucifixion indicated to those in his day and how he would have understood his own vocation, which included the cross; and how many first-century Jews understood “resurrection” and what this means about Jesus’ own resurrection. Then in the final two chapters Wright attempts to unpack how all of this pursuit for the historical Jesus applies to late 20th Century Christians, especially in a world increasingly governed by a hermeneutic of suspicion.

Some of the strengths of “The Challenge of Jesus,” at least in my mind, are the historical analyses Wright tackles. Putting the message and mission of Jesus back into its social, ideological and theological context brings out the colors of the gospel accounts in bolder reliefs and shades. Yet the strongest portion of his work is on the resurrection of Christ (something he will spill truck-loads of ink on in “The Resurrection of the Son of God”). This chapter pleasingly portrays how first-century Jews who talked about “resurrection” meant a physical, bodily event, and any other talk that was less than that would have been nonsense. He then walks the reader through 1 Corinthians 15, and the gospel records, making it clear why the bodily resurrection of Christ is important, giving solid evidences for that resurrection, and what the resurrection of Jesus from the dead means; “It was the moment when the creator God fulfilled his ancient promises to Israel, ( . . . ) It involved the transformation of Jesus’ body: it was, that is to say, neither a resuscitation of Jesus’ dead body to the same sort of life nor an abandonment of that body to decomposition. ( . . . ) It involved Jesus’ being seen alive in a very limited early period, ( . . . ) It was the prototype of all God’s people at the end of the last days. ( . . . ) It was thus the ground not only for the future hope of Christians but for their present work” (145).

The weaknesses of “The Challenge of Jesus,” include the final two chapters. Yet if a reader will approach them as an attempt by one scholar to think through the applications of what was covered in the first seven chapters, where he is trying to work out his own maxim, as “Jesus was to Israel, so the church is to be for the world” (183), then that reader will be launched onto their own thinking-application project. Others will likely find Wright’s characterization of Jesus’ divine self-awareness in less than traditional terms a souring weakness. The author sees Jesus’ self-awareness as more relational and vocational, “like the knowledge that I have that I am loved by my family and closest friends; like the knowledge that I have that sunrise over the sea is awesome and beautiful; like the knowledge of the musician not only of what the composer intended but of how precisely to perform the piece in exactly that way – a knowledge most securely possessed, of course, when the performer is also the composer” (121-2). Nevertheless, on this matter, it seems to me that he has not veered off into some heretical enclave, but is still soundly and safely within the property-boundaries of orthodox Christianity.

On the one hand, if someone were unfamiliar with N.T. Wright’s work, then I would encourage them to start with “The Challenge of Jesus” and move over to “Paul: A Fresh Perspective.” Taken together, these two short reads would easily and quickly familiarize one with Wright’s direction. And on the other hand, “The Challenge of Jesus” could definitely be a helpful discussion starter in an Adult Bible class, whether in a college “Introduction to the New Testament” course, or in a congregation’s Christian Education setting. I gladly recommend the book, with the same stipulation I give for C.S. Lewis and other authors: “Read him and profit, and read him with discernment.”


Many thanks to InterVarsity Press for the free copy of this work used for this review.
Book Review N. T. Wright