"Seeking Church" by Duerksen and Dyrness. A Review 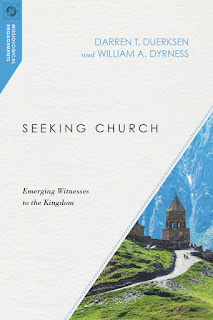 Sometimes it’s good to be challenged and questioned. On the one hand, it uncomfortably pushes us back through the glass walls of our assumptions and presuppositions down to the place where we started building, to see if the structure really is secure. At the same time, being contested and probed can strengthen and straighten our assurances. For me that was the primary value of “Seeking Church: Emerging Witnesses to the Kingdom,” a new 224-page softback composed by Darren T. Duerksen, a one-time Mennonite Brethren missionary to India and associate professor and program director of intercultural and religious studies at Fresno Pacific University, and William A. Dyrness, previously a Presbyterian Church (USA) missionary to the Philippines and now professor of theology and culture at Fuller Theological Seminary. Though the authors intend to help missionaries and congregations to be more thoughtful about contextualizing the gospel and “church,” it seemed to me that the book ended up challenging and questioning crucial aspects of what the church is, how it looks, and the ways it functions. It is well written and easy to get through. But it is also contesting and probing norms, which made it somewhat arduous reading.

Not to be confused with the Emergent Church movement, the authors take a theologically reflective look at “the sociocultural formation and growth of communities who follow Christ…in terms of emergence theory,” a theory that proposes that “social communities arise over time in ways that reflect their interaction with specific historical and cultural dynamics” (25). From this perspective Duerksen and Dyrness attempt to lay out ways to discern where church exists in various cultures and environments. Therefore, throughout the volume, step by step, they show how “the church is an emergent phenomenon, a community called out by God, joined to Christ, and empowered by the Spirit to embody and witness to God’s presence and work in the world” (174). All of this is good and well and was very helpful in acknowledging the ways believers and Christ-followers in different milieus have incorporated and fleshed out their faith and worship as “a situated interpretation of Scripture” (38). It was also very useful for spurring my own thoughts on why it is important to recognize the social, cultural and historical background to the way I guide my congregation in worship and the manners by which we work out our faithfulness.

The difficulties that arose from the book, from my standpoint, came about from a handful of underlying and persistent themes that seemed to call into question, or sideline, aspects of church and Christian faith that I would have thought were unquestionable. I will give two examples, the one bringing about the other. To begin, I found a serious misunderstanding of biblical authority. The book characterizes the early church from Acts on through the Pastoral letters, as an evolving, developing, adapting process. Though one can agree with much that is penned in this regard, it becomes clear that through the writers’ reverse hermeneutic many of the practices mapped out by the Apostles in the Christian Scriptures are seen as simply encased in the culture in which they lived and reflect the concerns and pressures of that period (33-4). Even though the book declares that the Scriptural directions are normative, in almost dualistic or Gnostic fashion, it trims “normative” down to only the theological meaning, not the embodied, physical practices; “What is authoritative in the teaching of Jesus and Paul is the theological meaning ascribed on those practices, not the specifics of those practices, which are mostly impossible for us to recover in any case” (127). Since there is purportedly little that is prescriptive regarding the practices, then we should maintain “a posture of openness to the development of new Christian rituals and liturgies today” (129). It doesn’t take too much thought and brainpower to run with this and see the many (mis)directions it could go and has gone.

Yet the easiest place to see the problem comes out in how baptism is handled. For the book what matters is the theological meaning of baptism, which is identification with Christ. This leads to the observation that what “Paul emphasizes in baptism, after all, is not a particular social practice but the identification of the believer with Christ’s death and resurrection. The specific ritual chosen to symbolize this is left open; it is nowhere specified in the New Testament” (132). That is because, according to the volume, all rituals are contingent. Only their meaning is normative, and so, why should the first-century contingent practices “necessarily be determinative for believers living two millennia later, in vastly different settings” (127)? Throughout the discussion on baptism, I found it disappointing the authors never mentioned that the risen Christ, who now has all authority in heaven and on earth, commanded his disciples to go, make disciples of all nations, baptizing them in a prescribed way, and so forth (Matthew 28:18-20). I also found unsatisfactory that there was little connection to our risen and authoritative Lord’s pronouncement that the Apostles, by the Holy Spirit, are the Lord Jesus’ mouthpiece, and thus their words are his words. As our Lord said, “Truly, truly, I say to you, whoever receives the one I send receives me, and whoever receives me receives the one who sent me” (John 13:20). Though I could give other examples, these two will need to suffice in this short review.

At the bottom I felt that there was a noteworthy misconstruing of biblical authority, which then gave “Seeking Church” its mistaken applications. If a reader will keep this in mind, I think the book can still be read for great profit, especially if they are planning to go into cross-cultural settings or move into a mission setting. This volume raises good questions that are important to work through. I cautiously recommend the book.

I am grateful that IVP Academic sent the book used for this review. I’m thankful that they were happy to send it to me on my request. And I appreciate that they allow me to make my own assessments, as can be seen herein.
Book Review Church Darren Duerksen William Dyrness