"Myths and Mistakes in New Testament Textual Criticism: ed. by Hixson and Gurry. A Review 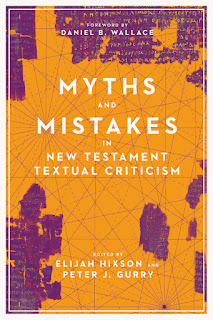 It could be a sign that I have crossed the threshold into the bleary realm of being eccentric and idiosyncratic. Honestly, I wholly expected to be bored to tears. But somehow reading about ancient manuscripts of the New Testament, codices, fragments and variants was enjoyable! Editors Elijah Hixson, junior research associate in New Testament Text and Language at Tyndale House, Cambridge, and Peter J. Gurry, assistant professor of New Testament and codirector of the Text and Canon Institute at Phoenix Seminary, have enlisted a team of knowledgeable and engaging authors in their new 400-page paperback, “Myths and Mistakes in New Testament Textual Criticism.” Not written for technicians, but rather for pastors, apologists, seminarians, and congregants, this volume intelligibly hits the mark.

The editors and contributors seek to accomplish several things. They address grandiose claims about the New Testament manuscripts from both friends and foes. The essayists show, whenever they can, where friend and foe are correct, and clearly where they are wrong. Further, the writers walk their readers through the ancient manuscripts of the New Testament, explaining what the variations are across textual “families,” how these affect our understanding of the diffusion of early New Testament documents, why they matter, and how they broadcast to us – against the claims of some – a strong textual stability and reliability. Though addressing and answering the claims and assertions of Bart Ehrman and Kurt Eichenwald is not the primary task of the volume, the authors do engage with them at important places.

I found the book helpful at numerous places and learned better ways of understanding how we came to have our New Testament Scriptures today. I also walked away with an even greater assurance at the reliability and stability of our New Testament, especially in the face of elaborate and alarming claims floating in popular culture. In several places I learned new factors I had never known before, such as the early practice of scribes abbreviating important names as they copied manuscripts, commonly called nomina sacra. Or, how the copyists who transcribed the New Testament evidenced in their copies some clear skills at transcribing, but also various aspects of quality assurance, so that “among the early manuscripts we find a wide range of skills and abilities, but still a significant majority (of copyists) appear to be competent transcribers” (142). This volume was filled with a trove of valuable explanations and research!

Hixson and Gurry should be applauded for, both, pulling together a sharp crew of contributors, and for having this topic covered so well. “Myths and Mistakes in New Testament Textual Criticism” is a keeper! This is a volume you will want on your shelf to refer to time and again. It would make a super gift for your pastor, Bible Class teacher, or favorite seminarian this holiday season. Without hesitation, I strongly recommend the book.

I am ever grateful that IVP Academic answered my request for a copy of this book used in the above analysis. And I’m thankful that all they asked of me was an honest review. Consequently, my evaluation is freely made and freely given.

The book may be obtained here: Myths and Mistakes
Book Review Textual Criticism