"Charles Hodge: The Pride of Princeton" by Andrew Hoffecker. A Review 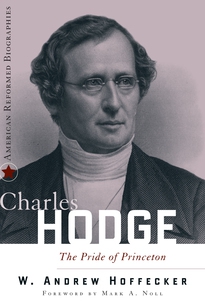 A dear Methodist minister friend bought me a copy and sent it to me out of the blue. He knew I like all things theological and Presbyterian, and Charles Hodge fits right into that nook. What my friend didn’t know is that this volume was written by an enjoyable Church History professor I had in seminary. So, my pleasure in receiving the tome was expanded exponentially! “Charles Hodge: The Pride of Princeton” is a 464-page paperback, and the fifth volume in the American Reformed Biography series by P&R Publishing. W. Andrew Hoffecker is emeritus professor of church history at Reformed Theological Seminary, Jackson, Mississippi, and author of two books on worldview, as well as “Piety and the Princeton Theologians.” Hoffecker desires to show “that Charles Hodge manifested the attributes associated with Calvinistic confessionalism (strong adherence to creedal religion, liturgical forms, and corporate worship) as well as the characteristics of evangelical piety (the necessity of vital religion marked by conversion, moral activism, and individual pious practice)” (32). I think the author reached his goal in a highly readable way!

Hoffecker chronicles the life of Charles Hodge, beginning with the family legacy of Presbyterians and patriots. He moves on through Hodge’s fatherless homelife and pious upbringing. Then the author describes the mentors Hodge had, his educational advancements and accomplishments, his development as a “New Side” (embracing the warm piety of the First Great Awakening) and “Old School” (holding to the Westminster Confession of Faith and classic Presbyterianism) theologian, his role in the controversies of the nineteenth century, and the ways Hodge held at bay the rising theological aberrations infiltrating from Germany. Hoffecker’s concluding paragraph summarizes the whole volume: “While the term New Side-Old School Presbyterian might seem a contradiction if not an impossibility in principle, Charles Hodge managed to exhibit the best that each faction could offer in its heyday. Unabashed in his enthusiasm for sound orthodoxy coupled with Reformed piety, as churchman, theologian, controversialist, and writer on all matters of interest, he lived and worked as one of the nineteenth century’s most influential Presbyterians” (360).

Hoffecker has done an excellent job in giving readers a wholesome biography on Charles Hodge, without sugarcoating the blemishes and idiosyncrasies. For Presbyterians, and those interested in American antiquity, this volume will put some much-needed historical background and context on the table. For Presbyterian ministers, you will find many of our own modern internal conflicts have their roots in Hodge’s own day and will gain more discerning perceptions. I’m delighted that my Methodist minister friend thought enough of me to obtain a copy and send it to me. But on the off chance you don’t have a friend who will purchase you a copy, let me encourage you to snatch up one as soon as you can and dive in. You won’t be disappointed!

It appears that at this writing, the book is on sale for a fraction of it’s initial cost. If you would like to obtain a copy you may go here: https://www.prpbooks.com/book/charles-hodge