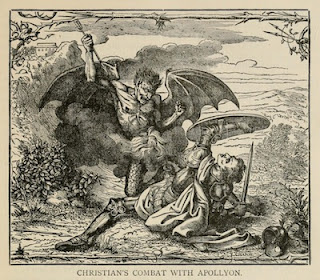 (Someone I know sent me an email today asking about the devil/Satan. Here is my reply. I thought some would find it useful)

You're right about the popular notion (even among Christians) of a yin and yang view of Satan and God. In fact, the first sermon I preached on Job (Job 1-3) about 4 weeks ago I mention that. Here's the link to the audio file of that sermon. It might be good to listen when you have a little time: "Job: Woe, Whirlwind, and Wellbeing - Pt 1"

I've never run across anything worthwhile on the demonic and Satan. If we leave aside the fanciful conjectures and just look at Scripture, there's very, very little on Satan....not enough to really write a book on. We know Satan is a real entity that communicates and converses, thinks, is cunning, hates God's people, at times encourages nations to go after God's people and rebel against God, and is a tempter (I just listed everything the Scripture says on the subject from Genesis to Revelation in a nutshell). But we really know almost nothing else. Nothing about his origin, for example (the passages people refer to in Isaiah and Ezekiel about the devil's origins, are actually poetic and prophetic hyperbole about earthly kings who thought themselves divine in some way).

I think God's design in not giving us too much information is; (1) so that we don't obsess on the devil (and if adherents of conspiracy theories are any example of how easily humans obsess on evil, then we get a sense of how prone we would be to obsess and treat Satan with greater fear than we do God); (2) and because he's not really that powerful or important (the same goes with the demonic). As I have said often in the Adult Class at church and in sermons, if the devil didn't exist, we would still go right on sinning and rebelling against God; we should see the devil as more of a cheerleader-to-sin rather than a dominating force that somehow makes us sin.

So, God has revealed just enough to let us know that the evil one exists, is our accuser, a tempter, cunning (though not necessarily original in his cunning), and a dark force behind Governments and institutions that rebel against God. I think C.S. Lewis is correct when he says somewhere that the devil and demons win if we think about them all the time and see one behind every bush; and the devil and demons win if we deny their existence, and are oblivious to their ploys.