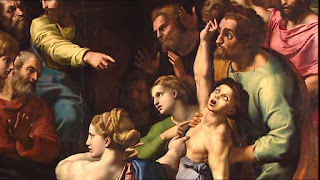 This morning I was reading Matthew 17.14-21, and was momentarily stumped. The following is a part of the fruit of my reflection.

After Jesus’ transfiguration he comes down with Peter, James and John and is met by a crowd. Out of the crowd comes a father, distraught and devastated by the disintegration of his son, “And when they came to the crowd, a man came up to him and, kneeling before him, said, “Lord, have mercy on my son, for he has seizures and he suffers terribly. For often he falls into the fire, and often into the water. And I brought him to your disciples, and they could not heal him” (17.14-16). Here is a desperate dad, helplessly and feebly imploring Jesus to do something! Jesus’ response is a bit off-putting at first, “O faithless and twisted generation, how long am I to be with you? How long am I to bear with you? Bring him here to me” (17.17). It seems to me that he is specifically calling his disciples and the crowd a faithless and twisted generation, not the father, who had the good sense to bring his boy to Jesus; whereas his disciples are ineffective, and the crowds are gawking. Then, as Jesus heals the disintegrating boy, we find out this was not the normal kind of seizures and epilepsy. There was something peculiarly devilish and dark about it, “And Jesus rebuked the demon, and it came out of him, and the boy was healed instantly” (17.18). In some way, this particular episode of epilepsy was a result of demonic domination; it was a manifestation of the Devil’s attempt to have rulership, or dominion; and the evil one’s power is snapped in two at the command of Jesus!

But what really caught me up was what happens next. The disciples get alone with Jesus and (maybe with a whine in their voices) inquire as to their impotence, “Why could we not cast it out” (17.19)? Our Lord’s response is twofold. First, “Because of your little faith.” That statement “little faith” in the Greek is oligopistia. It’s a term he uses several times with the disciples. It means something like “poor faith; impoverished faith; penniless faith.” It stands in stark contrast to what Jesus says next: “For truly, I say to you, if you have faith like a grain of mustard seed, you will say to this mountain, ‘Move from here to there,’ and it will move, and nothing will be impossible for you” (17.20). Often this verse (Matthew 17.20) gets either lifted out of its context and bandied about as a cure-all for every difficulty and challenge. Which then leaves loads of Christians piled over with guilt because their “mountains” (obstructions at work; obstacles at home; etc.) weren’t moved. Or this verse gets misused to say that Jesus is promising we can heal all diseases if we just have teeny, mustard-seed-sized faith. Which again leaves loads of Christians buried in shame because their cancer didn’t go in remission; their Aunt Matilda’s COPD didn’t reverse; and so forth.

The key here is that our Lord doesn’t say any and all mountains; he says very pointedly and particularly, “this mountain.” After puzzling over his promise for a bit, and the specificity of "this mountain," it finally dawned on me. Mountains were regularly pictured in the Hebrew Scriptures as the capitols of kingdoms, because mountains were where many ancient royal cities were built for defensive purposes (and to put them up, closer to the patron-gods). Jerusalem is on a mountain, and is regularly called Mount Zion. But Gentile kingdoms would also be pictured as mountains, for example: “I will repay Babylon and all the inhabitants of Chaldea before your very eyes for all the evil that they have done in Zion, declares the LORD. Behold, I am against you, O destroying mountain, declares the LORD, which destroys the whole earth; I will stretch out my hand against you, and roll you down from the crags, and make you a burnt mountain” (Jeremiah 51.24-25). Jesus had just broken the dominion of darkness that had hold of this young boy. “This mountain” is referring to Satan’s devilish rule in the world and in people’s lives!+

The promise is not that if we have mustard-seed-sized-faith we will be able to remove all obstacles from our business; overcome our poor credit ratings; walk out of the hospital free of all disease; suddenly have the funds to purchase that $500,000 Bentley; etc. The promise is that we will see (and even get to be part of) Jesus triumphing over the dominion of the evil one, him setting captives set free, having prisoners released and restored!*

Let this feed your prayers# for people in your life who are dominated by devilish addictions, dark and destructive actions, or the deceits and dishonesties of subtle voices that cheer your loved ones into self-destruction. Let Jesus’ promise fuel your hope in proclaiming the liberating Gospel, in evangelism, and in mission work. Rejoice, and trust that he is the one triumphing over the dark forces of oppression, human trafficking, ethnic and tribal subjugation, domestic abuse, and so on. And ask him to lead and strengthen you in your part of his mountain-moving world rescue operation.

“For truly, I say to you, if you have faith like a grain of mustard seed, you will say to this mountain, ‘Move from here to there,’ and it will move, and nothing will be impossible for you.”

+ This episode fits in well with the fact Jesus has just been wondrously transfigured and declared by the voice from the brilliant cloud as: "This is my beloved Son, with whom I am well pleased; listen to him" (17.5). Jesus has the Father's approval and pleasure in breaking the power and dominion of darkness!

*Two other passages that go along this line of liberating from the dominion of Satan to the liberating rule of Christ are Acts 26.15-18, and Colossians 1.13-14.

# How fitting that some Greek manuscripts add verse 21, "But this kind never comes out except by prayer and fasting."