"Conformed to the Image of His Son" by Haley Goranson Jacob. A Review 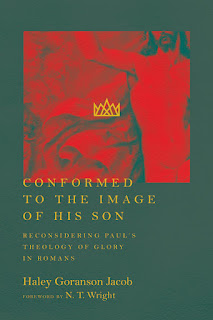 What exactly does συµµόρφους τῆς εἰκόνος τοῦ υἱοῦ αὐτοῦ (“…conformed to the image of his Son...”) mean within its own literary and theological context? Answering this question is the main project of a new 312 page softback, “Conformed to the Image of His Son: Reconsidering Paul’s Theology of Glory in Romans” penned by Haley Goranson Jacob, assistant professor of theology at Whitworth University in Spokane, Washington. This carefully written scholarly manual methodically weaves its way through Septuagint and Koine Greek, Romans 1-8, and mounds of New Testament researchers to get to its destination. Though it is a highly specialized volume, nevertheless it is manageable for the patient and unflappable non-technical reader as well.

After N.T. Wright’s enthusiastic forward to the book, Jacob lays out her program and methodology. She openly places her premise before the reader, which she goes on to rehearse numerous times in every chapter, “conformity in Romans 8:29 refers to a functional conformity; that is, when believers are conformed to the image of the Son, they are conformed to his status and function as the Son of God who rules over creation…I will argue that this…is at the heart of Paul’s meaning…” (10-11). Through the remainder of the volume the author painstakingly unpacks this premise, and ends where she began, but bigger: “I have argued that Romans 8:29b refers to believers’ participation in the Firstborn Son’s rule over creation as God’s eschatological family and as renewed humanity. This rule is the reinstitution of humanity’s dominion over creation as God’s vicegerents, as is narrated in Genesis 1:26-28 and picked up in Psalm 8:5-8. Believers are “conformed to the image of [God’s] Son” on the basis of their adoption into God’s family (Rom 8:14-16) and thus their participation in the Messiah’s Sonship (Rom 8:29c). Adopted Children of God share in the Firstborn Son’s inheritance (Rom 8:17), his possession of and rule over the earth, which is to say that they share in the Son’s glory (Rom 8:17)” (266). It’s a moderate sized book with a big purpose and large import!

In the first section of the volume (chapters 2-4) Jacob works her way through the Greek words for glory, glorification, and glorified. While there are times and places where glory can refer to God’s own theophonic splendor, more times than not, kabod and doxa etc. denote God’s status, honor, and identity as king and sovereign. When God’s theophonic splendor is being described by these words, it is a sign of God’s unsurpassed greatness, absolute power, and visual presentation of his status as king. When these words are used with regard to humans, the author shows that only in a few cases does it refer to radiance and splendor. But in the prevailing number of cases, it is speaking of exalted status, honor, authority and rule; “it is almost entirely the case that the glory given to a person (or a person’s glorification) either constitutes or is closely related to the honor, power, wealth, or authority associated with an exalted status of rule" (62-3). This conclusion has great significance for Romans 1-8, especially as Paul appears to be drawing from Genesis 1.26-28 as it is reclaimed in Psalm 8; “I will argue here that throughout the letter there is an implied narrative of glory, a narrative that begins with humanity forsaking the glory of God, that is, humanity’s purposed identity and vocation (Rom 1:23; 3:23) and God’s people receiving again the glory of God (Rom 2:7, 10; 5:2; 8:17, 21, 30; 9:23). This narrative of glory forms the heart of the meaning behind Paul’s dense phrase “conformed to the image of [God’s] Son”” (98). Jacob then spends chapter 4 explaining how union with Christ in Romans 8 is an active, participatory union in Christ’s Messianic Sonship and rulership. For me personally, as I came to the end of this section, I was lost in thoughtful wonder!

The second section of “Conformed to the Image of His Son” (chapters 5-7) tackles, in earnest, Romans 8:29, and precisely in its location in Romans 8. There are thought-provoking surprises in nearly every subsection. One of my favorite conclusions by the author states that physical “redemption for both creation and humanity is a means to a much greater end: freedom to fulfill God’s purpose. Only when God’s children are reinstated to their original throne – their crown of glory and position of dominion over creation as expressed in Psalm 8:5-8 – will the creation be liberated” (241). I came to a similar conclusion in my own book “Gnostic Trends in the Local Church” where I reviewed Irenaeus’s pro-creation Christology that works toward a redeemed, restored and renovated creation.

Jacob further shows how, in Romans 8, glorification, just like adoption, has both a “now” and “then” aspect. Glorification has begun, and glorification will come in utter fullness in the resurrection. “Believers are not yet glorified entirely or completely, but they nonetheless participate in the Son’s glory in the present as those whose new identity is established in the Messiah, the Son of God” (250). Therefore, according to Jacob, God’s eschatological family, whom I often call God’s heaven-on-earth people, or his new-heavens-and-new-earth household, are predestined, called, justified and glorified to bring God’s redemption to the κτίσις, the world, creation. The way it is done for now is “in part by action and in part by prayer (Rom 8:26-27)” (Ibid.).

A reader may not agree with all of Jacob’s conclusions. I know I find it difficult to completely accept some aspects of her analysis, especially since it would mean that our Bible translations have gotten it wrong for so long. However, time spent in “Conformed to the Image of His Son” is not wasted time! At the very least one will walk away thinking differently about God’s world reclamation project, our role in it, and the whole idea of glorification. This is a volume that needs to be taken up and poured over by pastors, theologians, New Testament scholars, and divinity students. Further, it would make an important addition to seminary and university libraries. If you can read Koine Greek, or if you can tolerate it and thoughtfully stay with the flow of Jacob’s arguments, you will be glad you studied this work. I highly recommend it.

My deep thanks goes out to IVP Academic for the volume they sent me at my request and used for this review. They asked nothing more of me other than an honest review. And that is what I have presented to the reader.