"The Lost World of the Flood" by Tremper Longman III and John H. Walton. A Review. 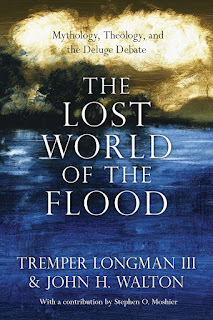 The Biblical deluge story is an episode in Scripture that generates plenty of friction. It brings questions to the surface for those who believe it is authentic, and raises the ire of those who are certain it is fictional. Not long ago Tremper Longman III, Distinguished Scholar of Biblical Studies at Westmont College in Santa Barbara, California, and John H. Walton, professor of Old Testament at Wheaton College and Graduate School, added their contribution with a 192 page softback, “The Lost World of the Flood: Mythology, Theology, and the Deluge Debate”. The volume also includes a chapter on geological data by Stephen O. Moshier, professor of geology and chair of the geology and environmental science department at Wheaton College, and director of the Black Hills Science Station. This volume is the fifth installment to IVP Academic’s “The Lost World” series.
The emphasis within “The Lost World of the Flood” is quickly made clear: the authors hold to the flood account as a genuine space-and-time event that employs worldwide language to communicate a theological message. This is what the authors are denominating as theological history. Actual events that happened in the real past, recounted and interpreted by Bible authors to tell theological truths. But according to Longman and Walton, the use of worldwide language does not necessitate that the flood story was actually global. Rather, the language is hyperbolic, such as when I say to my friend, “Man! You weigh a ton!” Unless my friend is the Hulk, then the excessive language communicates fact without precise accuracy. In other words, the Biblical account utilizes worldwide language to describe a seriously traumatic, but regional flood, to make a theological point.  A large percentage of the chapters simply add detail and color to this main emphasis.
Other chapters pick up further tidbits that either feed into the Deluge story, or come after it. For example, who were the sons of God and the daughters of man? There is also a discussion about the literary placement of the Tower of Babel incident in Genesis 1-11. And then there is an important treatment on the theological flow of the first eleven chapters of Genesis. But the majority of the material is devoted to the Flood itself, the form in which the tale is recounted, and the purpose of the story.
I immediately noticed a change in attitude and approach in this volume. There was a pronounced humility and charitableness toward those who may not agree with the authors’ assessments, something I didn’t find in previous installments in “The Lost World” series. “If the readers deem that information useful and beneficial, we are gratified. But for readers who cannot accept our findings, believing that the Scripture makes claims that require other conclusions, we hope that at least we have shown how our particular interpretation is the result of faithful interpretation” (viii). Further, Longman and Walton took great pains to emphasize that they hold to the Scriptures as God’s Word, which speaks truly, and to which they want to submit themselves and their lives.
Beyond the fact that I disagree with the authors’ premise that the flood was a traumatic, but regional flood, rather than a worldwide deluge, I had one other chief dissent. Several times in the book Longman and Walton declare that God did not inspire the events, only the Biblical interpretations of the events. “Events are not inspired; interpretations of events are inspired” (23), and “Methodologically, we have noted that events are not authoritative; interpretation of events by the biblical authors is what carries authority” (177). This sentiment is unsatisfying and causes some head-scratching. How can you have the one without the other? If the authoritative interpretation by the inspired writer says these events happened at the direction and decree of God, then that seems to me to indicate the event is also inspired. I’m not sure you can affirm one and disavow the other, without creating internal dissonance. Certainly there are incidents in Scripture that are purely descriptive and not prescriptive, and the rehearsal of the event makes it clear. But once the author merges the description of an affair with the diktat of God, as is happening in Genesis 6-9, it seems fairly clear to me that the authoritative interpretation is telling us the two go hand-in-glove; event and interpretation are inspired and authoritative.
“The Lost World of the Flood” was easier for me to read than the other volumes in “The Lost World” series. I found the tone in this book much more tolerant. Most of the material stirred my thinking in a way that I disagreed with the conclusions, but felt I was in a safe place to do that. This volume could be valuably used in a group discussion, or as a supplemental textbook in a seminary class. I cautiously recommend the book.
Thanks to IVP Academic for providing, upon my request, the free copy of the book used for this review. The assessments are mine given without restrictions or requirements (as per Federal Trade Commission’s 16 CFR, Part 255).
Book Review John H. Walton The Flood Tremper Longman III