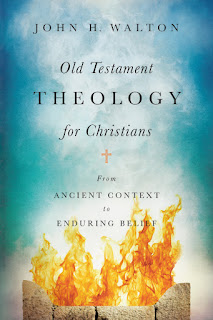 To help Christians read, and grasp, what the Old Testament says and doesn’t say, John H. Walton, professor of Old Testament at Wheaton College and Graduate School, has compiled a new 320 page hardback. “Old Testament Theology for Christians: From Ancient Context to Enduring Belief” is, overall, an easy volume to peruse, because it is written for those who have little or no specialized background in Old Testament studies. If a reader is unfamiliar with Walton’s program in his “Lost World” series, this is a great entry point. Most of Walton’s central ideas are mapped out and visited in these pages.

Outside of the introduction and conclusion, the work covers six Old Testament foci: Yahweh and the Gods, Cosmos and Humanity, Covenant and Kingdom, Temple and Torah, Sin and Evil. Each chapter methodically works through its subjects from the Hebrew Scriptures. Though Walton gives extra time and energy to how the Ancient Near Eastern (ANE) world addressed each of these subjects, he pays very little attention to the way in which the New Testament writers read and employed these earlier sacred writings. As the author asserts: “we should be willing to look at Old Testament theology independent of New Testament theology” (20).

What the author sees as the primary theme that progresses throughout the Old Testament, “is the establishment of God’s presence among his people” (26). Though he doesn’t see it as the center of the Hebrew writings, he does note how it dominates and diffuses across covenant, promise, Torah, and kingdom. Walton will happily circle back to this major theme throughout the document. Coupled with this primary theme, he will capitalize on the distinct difference between the ANE world’s view of the gods and Israel’s approach to YHWH. The ANE world saw the relationship between people and gods as the “Great Symbiosis” where “the people took care of the gods,” whereas YHWH’s relationship with his people is the “Great Enterprise” in which God protects and provides for Israel and gives them a role in his plans and purposes (112). Walton’s unpacking of this primary theme, and the difference between the “Great Symbiosis” and the “Great Enterprise” is his most helpful contribution to reading the Old Testament.

Walton’s approach in “Old Testament Theology for Christians” is to attend “to the historical place and setting of the Old Testament literature, but I will not be stopping at historical inquiry. I will instead seek to use historical inquiry to uncover the enduring theological revelation that remains God’s Word to the church today” (25). It becomes clear, as one advances through the book, that the emphasis is on what “remains God’s Word to the Church today” after the author has peeled away much that has historically been thought to be affirmed in the Old Testament. Since the author reads and hears the Hebrew Scriptures through the filter of ANE’s cultural stream, he can’t lean on the text as factual or historical, but he can only glean from the text what he presumes is revealed about God’s mission: “The message transcends culture, but it is given in a form that is fully ensconced in the ancient cultural river of Israel” (76). Therefore, for the author, the Old Testament has nothing to say about the Trinity, does not mention a reward or judgment in the afterlife, has no concept of original guilt passed on from Adam to the rest of humankind, presents no developed notions of Satan, has no mechanism for salvation from sin, does not recognize the indwelling Spirit, and does not prescribe evangelism (286-293).

“Old Testament Theology for Christians” was a hard book for me to swallow, not because of any technicality, but because of the author’s working premises. I’ve noted above what I found valuable, and some of what I found problematic. If you need to delve into Walton’s “Lost World” project, this volume would be a good starting place to familiarize yourself with what he’s up to and why. If you’re looking for a good book to help you read and understand the Old Testament, I would recommend you go elsewhere.

Thanks to IVP Academic for providing, upon my request, the free copy of the book used for this review. The assessments are mine given without restrictions or requirements (as per Federal Trade Commission’s 16 CFR, Part 255).
Book Review John H. Walton Old Testament