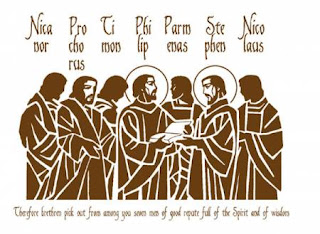 What in the world is a deacon? What are deacons supposed to be doing? Who should be deacons? Where did the office of deacons arise from? How do deacons benefit our congregation? These are great questions and likely flutter and float in the backs of our minds whenever we have an officer election and installation. I will try to answer these questions and others as I discuss deaconing and deacons.

Deaconing: As we begin with our passage, Paul describes his Gospel work, as a diaconal service, using two nouns – one for the work, “We put no obstacle in anyone's way, so that no fault may be found with our ministry (ha diakonia 3) and one for his person engaged in the work, “but as servants of God (theou diakonoi ) we commend ourselves in every way” (4). Almost never is the word deacon used of an official office, but almost completely used of occupation, not about a label as much as the labor, not concerned with position as with practice. It is service, Gospel-centered-Jesus-shaped service offered to God and for God’s people. Paul will call himself and Apollos deacons, “What then is Apollos? What is Paul? Servants (diakonoi) through whom you believed, as the Lord assigned to each” (1 Corinthians 3.5). He will describe Timothy, while pastor of the church in Ephesus, as being a good deacon, “If you put these things before the brothers, you will be a good servant (diakonos) of Christ Jesus, being trained in the words of the faith and of the good doctrine that you have followed” (1 Timothy 4.6). He will also describe a dear sister, Pheobe, as a faithful servant of Christ’s church in her rich assistance, “I commend to you our sister Phoebe, a servant (diakonon) of the church at Cenchreae, that you may welcome her in the Lord in a way worthy of the saints, and help her in whatever she may need from you, for she has been a patron of many and of myself as well” (Romans 16.1-2). Similarly he will define the household of Stephanas as engaged in deaconing, “Now I urge you, brothers—you know that the household of Stephanas were the first converts in Achaia, and that they have devoted themselves to the service (diakonian) of the saints” (1 Corinthians 16.15). In fact, even false apostles and false ministers present themselves as deaconing, “So it is no surprise if his servants (diakonoi), also, disguise themselves as servants of righteousness (diakonoi dikaisunas). Their end will correspond to their deeds” (2 Corinthians 11.15). The emphasis and focus is not necessarily, nor automatically on position but practice; not on label but labor, not about office but occupation. That’s why Paul can go on to say that all church members are deaconers, “to equip the saints for the work of ministry (ergon diakonias), for building up the body of Christ” (Ephesians 4.12).

And our self-giving Lord Jesus, who became obedient to the point of death, even death on the cross, is the enfleshment of deaconing, “For even the Son of Man came not to be served (diakonthanai) but to serve (diakonasai) , and to give his life as a ransom for many” (Mark 10.45). Whether the word is used of the work or the person it is almost never used of an official office, but almost completely used of occupation, not of position but practice; not a focus on label but labor. It is almost always and overwhelming used of service, Gospel-centered-Jesus-shaped service offered to God and for God’s people. Service offered by men, women, girls and boys, ministers, leaders, and members. We are all – because of Jesus – deaconers deaconing in God’s world rescue operation!

Deacons: Yet there are a few times when position, label and office are mentioned. It is normally because they are mentioned in conjunction with other leaders and officers. For example, “Paul and Timothy, servants of Christ Jesus, to all the saints in Christ Jesus who are at Philippi, with the overseers and deacons” (Philippians 1.1). And only one other time (outside of Acts 6) that the position is specifically talk about is when Paul lays out to pastor Timothy the traits that qualify a man for the office: “Deacons likewise must be dignified, not double-tongued, not addicted to much wine, not greedy for dishonest gain. They must hold the mystery of the faith with a clear conscience. And let them also be tested first; then let them serve as deacons if they prove themselves blameless. Their wives likewise must be dignified, not slanderers, but sober-minded, faithful in all things. Let deacons each be the husband of one wife, managing their children and their own households well. For those who serve well as deacons gain a good standing for themselves and also great confidence in the faith that is in Christ Jesus” (1 Timothy 3.8-13).

Since these folks are brought out and set up in front as deacons, they embody the deaconing of the congregation, they exemplify Gospel-centered-Jesus-shaped service offered to God and for God’s people, and help the deaconing congregation to deacon better. They serve by leading their fellow deaconers (ministers, elders, members, women, men, boys and girls) into deaconing in a Jesus-shaped way.

As we conclude keep in mind that all of us who have been redeemed by the deaconing Jesus, who have been rescued by our self-giving Lord, are involved in deaconing for God’s glory and one another’s good. And our deacons help lead us into better deaconing in God’s world rescue operation!

(I presented the above at the installation of two deacons in our congregation on 10 September 2017. If you find it beneficial, feel free to use it. Mike)
Deaconing Deacons