"Old-Earth or Evolutionary Creation?" A Review 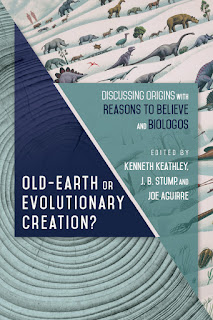 It’s a hot topic that will often raise the hackles, hoots and howls of many, no matter on which side of the intersection they stand. That’s what makes “Old-Earth or Evolutionary Creation? Discussing Origins with Reasons to Believe and BioLogos” such a unique work. Edited by Kenneth Keathley, director of the L. Russ Bush Center for Faith and Culture and professor of theology at Southeastern Baptist Theological Seminary in Wake Forest, North Carolina, J.B. Stump, senior editor at BioLogos, and Joe Aguirre, editor in chief at Reasons to Believe, this 256 page paperback does the nearly unthinkable: clears the pavement and gives space in the crosswalk for a hearty conversation. Here is a “Two-Views” book on the different creation models propounded by BioLogos and Reasons to Believe. It is set up to “help lay readers identify science-faith issues, comprehend what the two organizations stand for, understand the nature of their dialogue and what the two organizations hope to achieve through it, and appreciate how they and the church at large can benefit from the conversation” (6).  But it also demonstrates “that two creationist organizations can strongly disagree with one another while treating one another with Christian charity, respect, and a willingness to seriously consider the merits of an opposing position” (7). Beyond the subjects themselves, this is one of the most important purposes of the book!

Each chapter of “Old Earth or Evolutionary Creation?” follows the same structure. There is an assigned moderator for each chapter (Southern Baptist seminary professors) who begins the discussion of a given topic. Then the BioLogos representative – who hold to an evolutionary creationist position – states their perspective, affirmations, clarifications and evidences. Next the Reasons to Believe delegate – who present an old earth but special human creation view – exhibits their position, explanations, substantiations and amplifications. Afterward the moderator “Redirects” both participants with questions for further clarification to which the two parties respond respectively. And lastly the chapter ends with a summarization by the moderator. By following this clearly marked out pattern, it truly helps to keep the reader’s head in the game!

The subjects covered in this book are focused along a specific trajectory. It begins with both groups defining their organizations with their similarities and distinctions. Then the topics start moving along a defined line: Biblical authority and interpretation, Adam and Eve, God’s involvement in creation, scientific methodology, evolution, and geological-fossil-biological-anthropological evidences. On the one hand, none of the participants get so deep in their given field to utterly lose the reader with guild-specific lingo; which means, on the other hand, that the amount of evidence from either party is minimal, and there is a lot of “for more details refer to this book or that article”. But overall, the approach taken up in the book makes the subjects graspable and keeps those of us who are uninitiated from giving up in hopeless despair.

I found myself in disagreement with both schools at numerous places, and most often with BioLogos. For example, all of us agree with God’s two books of revelation (creation and canon), but for all of the loud protestations still the BioLogos spokespersons appeared to give greater respect to biology, geology, archeology, paleoanthropology and archaeogenetics; and left me with the feeling that materialist naturalism really was their unrecognized blueprint. Also, since their view of the beginning of things accepts micro and macro evolution, it appeared to me that it left potential holes in their means of salvation and created huge question marks with regard to their concept of the new heavens and new earth, and resurrected humans in glory. To their credit, they emphatically affirmed a very traditional Evangelical and Protestant outlook on Jesus and the way of salvation, but it simply didn’t seem to naturally flow out of their model.

Though “Old-Earth or Evolutionary Creation” is not exhaustive or overwhelmingly persuasive, nevertheless it is a helpful manual on multiple levels. In this single volume a student has a very clear and concise summary of the important issues. But also, compacted into a small volume, are the explicit and reasoned positions of both BioLogos and Reasons to Believe stated by their own representatives. Finally, as I specified at the end of the opening paragraph, this manuscript shows how Christian adults who are convinced of their positions can civilly discuss a hot subject without raising hackles, hoots and howls. For at least these three reasons I highly recommend this book.

Thanks to InterVarsity Press for providing, upon my request, the free copy of the book used for this review. The assessments are mine given without restrictions or requirements (as per Federal Trade Commission’s 16 CFR, Part 255).
Book Review creatio ex nihil Creation Evolution Old-Earth