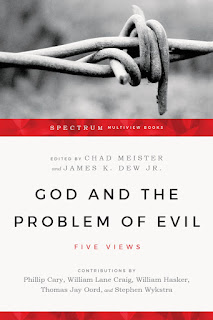 An age old conundrum that pesters Christians, either intellectually, emotionally or both, is the question of evil in the moral order and in creation. Not long ago a fresh 199 page manuscript rolled off of the presses at IVP Academic addressing this issue from within the Christian household. “God and the Problem of Evil: Five Views” draws together several philosophical and theological scholars who lay their positions out on the table for all to examine. The book is edited by Chad Meister, author and professor of philosophy and theology at Bethel College in Mishawaka, Indiana, and James K. Drew Jr., author, associate professor of the history of ideas and philosophy and dean of the College at Southeastern Baptist Theological Seminary. The material between the soft covers is not overly academic and is accessible to most adult readers.

“God and the Problem of Evil” comes in two parts. In the first section each of the respective positions is put before the reader in detail covering anywhere from nineteen to twenty-four pages per position. In the second section the individual authors interact with and critique the other writers. The strength, or weakness, of this approach (depending on your temperament) is that the exchanges are corralled and congregated into single chapters in the second half of the book and not hotly debated at the end of each position.

Phillip Cary, professor of philosophy at Eastern University, presents the classic position that traces its lineage back through thinkers and theologians to Augustine of Hippo. The classic view says that “no evil takes place unless God permits it, and that God has a good reason for permitting evil, which takes the form of a greater good that he uses evil to bring about” (14). Cary masterfully weaves together theology, biblical tragedy, story and liturgy that sweep up the reader into hopeful prayer and prayerful hope.

William Lane Craig, Research Professor of Philosophy at Talbot School of Theology and Professor of Philosophy at Houston Baptist University, offers a position based on the work of Jesuit theologian Luis de Molina. Inside molinism is much that one will find in the classic view with the modifying addition of God’s middle knowledge in which “God has decided to actualize a world of libertarian free creatures and to skillfully play the hand that he has been dealt in such a way that his ultimate ends are achieved through creaturely free decisions, despite the sinful decisions they would make and the evils they would bring about” (39). Craig pulls together the theoretical, missiological, and statistical.

William Hasker, Distinguished Professor Emeritus of Philosophy at Huntington University, unpacks an open theist stance with regard to evil. Here “the future is known by God as what might happen, and as what will probably happen, but not as what will definitely take place” and so “it is impossible even for God to know with certainty how those creatures will respond; there is a genuine possibility that they will not respond in the way he intended and desired for them to do” (60). Hasker disagrees with the determinism he sees in a specific-benefit theodicy and optimistically represents a general-policy theodicy of God as a risk-taker.

Thomas Oord, theologian, philosopher, and scholar of multidisciplinary studies who teaches at Northwest Nazarene University in Nampa, Idaho, gives an account of essential kenosis. Under this concept, because God’s nature is “self-giving, others-empowering love” that is “necessarily uncontrolling” then God cannot unilaterally prevent evil (84). In other words, “God’s nature of love makes it impossible for God to withdraw, override, or fail to provide the freedom, agency, or basic existence of others” (85). As Oord works out his theory he makes other interesting and surprising assertions that swim against the vast majority of Christian thinking for two-thousand years (95).

Stephen Wykstra, professor of philosophy at Calvin College in Grand Rapids, Michigan, explicates skeptical theism. This particular outlook is not quite so alarming as the name might imply. As Wykstra notes, “so-called skeptical theism relies strongly on what I’ve here called “conditional theistic humility” – an affirmation that if the theistic God does exist (that is, if mere theism is true), then it is pretty unsurprising that the divine purposes for God’s “actions” will often be beyond our ken. This conditional, modest as it is, removes the sting from some evidential arguments that might otherwise seem lethal to theism” (117). Of all the chapters, Wykstra’s is the most abstract for the non-philosophically trained reader, and yet it is, concurrently, very human and personal.

Once all of the authors have unrolled and displayed their wares, then each gets the opportunity to walk around and point out the weaknesses and potential compatibilities of the other exhibits. It’s in the final section that it becomes clear how three of the positions can actually walk close together (classic, Molinist and skeptical theism) and how the other two are near cousins (open theism and essential kenosis). It is rather unfortunate how Hasker is downright dismissive and demeaning of the classic view, while giving the other positions thoughtful interaction. Beyond that, the rest of the contributors are gracious in their criticisms, while remaining unwavering and more-or-less firm.

I found “God and the Problem of Evil” useful and eye-opening in its design and dissemination. I became roused and reverently praying by the time I finished reading the classical position. I was positively challenged to think hard by several chapters, and was drawn to the outskirts of the ways of the Almighty (Job 26.14) and found my heart touched in places while peering over the edges of skeptical theism. I have no problem endorsing this book!

Thanks to IVP Academic for providing, upon my request, the free copy of the book used for this review. The assessments are mine given without restrictions or requirements (as per Federal Trade Commission’s 16 CFR, Part 255).
Book Review Theodicy