"The Disruption of Evangelicalism" By Geoffrey Treloar. A Review 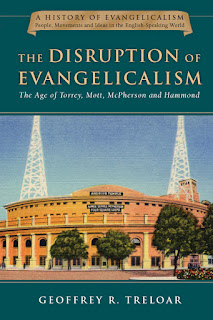 Hot and steaming off of the press, with the fresh smell of newness, comes “The Disruption of Evangelicalism: The Age of Torrey, Mott, McPherson and Hammond”. It is the fourth volume in a planned five volume series chronicling a history of evangelicalism. The author, Geoffrey R. Treloar, is director of learning and teaching at the Australian College of Theology, visiting fellow in history in the School of Humanities and Languages at the University of New South Wales, and veteran writer.  This volume readably recounts approximately 50 years of evangelicalism’s story as it moves from the 19th into the first half of the 20th Century. The style makes the material accessible for savants and beginners alike.

Treloar lays out “The Disruption of Evangelicalism” into three neatly folded stacks: 1900-1914, then 1914-1918, and finally 1919-1940. Though none of the sections are exhaustive, they are representative (viii) and insightful. Each timeframe covered develops the main parties, concepts, approaches, frustrations and successes of the movement. The author follows Bebbington’s quadrilateral of enduring qualities that marked the boundaries of evangelicalism: conversionism, Biblicism, crucicentrism and activism (6-7).  Yet by the end of the book it becomes clear that two lesser qualities could be added: the reach to maintain social/national influence and the pursuit of ecumenism.

As readers ride the current flowing through the book, they will begin to pick up, page after page, how the center was becoming threadbare and unknotted. Diversification in evangelicalism deepened over the decades, separatist tendencies were strengthened, and cultural influence slipped from their hands. Altogether, evangelicalism became “more divided, less coherent and less credible.” In other words, the first half of the 20th Century was “the disruption of evangelicalism” (284).

On a personal level, I found several aspects of the book informative and edifying, of which I will only mention two. First, in this centenary season of the Great War (the First World War) it was gratifying and timely to delve into the three chapters covering 1914-1918, and some of the material dealing with the aftermath. Treloar beneficially shows how evangelicalism was influenced and affected by the Great War in three ways, “first in their readiness to become involved spiritually as well as materially, and then in the conduct of evangelical servicemen ‘under fire’ at the front and also in the manner evangelicals fought ‘the war within’ at home” (118). But further he maps out the numerous ways the Great War and its consequences aided in dislocating and disordering evangelicalism.

Secondly, it was refreshing to read that our early 20th Century evangelical forbearers had a strong view of the Lord’s Day, and “generally retained a high view of the Sabbath as a day set apart for physical and spiritual renewal on which the moral and spiritual power of both church and the wider society depended” (264). And how, further, they perceived that the neglect of Sunday by the population was “an index of the spiritual state of society.” That the relaxation of Sunday as a day of rest, and the “encroachments of newspapers, sports and popular entertainments” on the Lord’s Day “was a clear sign that a major cultural change was taking place” (167). Unfortunately much of this way of thinking and way of living has been lost in 21st Century churches. Nevertheless it was encouraging to be reminded that a high view of the Lord’s Day is not a foreign concept, but is in the evangelical background.

“The Disruption of Evangelicalism” is a good read, being both astute and educational. Seminarians would benefit by reading it, along with pastors and professors. In fact, by perusing this book Christians and evangelicals of all stripes and strides will gain a deeper perception and appreciation of a significant slice of Church history in the West. I strongly encourage you to obtain a copy and dive in!

Thanks to InterVarsity Press for providing, upon my request, the free copy of the book used for this review. The assessments are mine given without restrictions or requirements (as per Federal Trade Commission’s 16 CFR, Part 255).
Book Review Church History Evangelicalism Geoffrey Treloar