"The Day the Revolution Began" by N.T. Wright. A Review 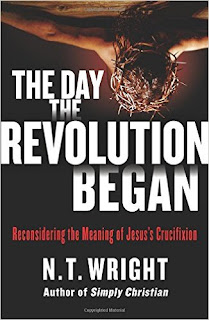 While taking up a scholarly book, I find it helpful to read it with two minds simultaneously. The first simply tackles the work as a reader/learner to appreciatively gain as much as possible from the author’s investigation, insights and inferences. The second is a more studied approach that withholds verdicts until the end, looks for streams of developing thought, repetition of concepts, and seeks out answers to questions the manuscript raises. Both minds are needed when reading N.T. Wright’s latest 448 page hardback, “The Day the Revolution Began: Reconsidering the Meaning of Jesus’s Crucifixion.” This document is intended to reach a wide audience, carrying them along well-reasoned trails that travel smoothly and without any footnotes to turn their ankles on, until they arrive at the author’s desired destination.

From one location, “The Day the Revolution Began” is primarily concerned with taking readers to the cross of Christ to draw them up into the brilliance and beauty of what was accomplished that first Good Friday. Wright alerts us that Jesus’s death “made all the difference in the world, all the difference to the world. The revolution has begun.” And therefore he “wants to show what that means and how a fuller vision of what happened when Jesus died, rooted in the New Testament itself, can enable us to be part of that Revolution” (5).  To this end, the author dwells on the stories of Israel, drinks deeply from the gospel accounts, dances through Paul’s writings devoting a large portion of pen and pulp to the Letter to the Romans, and disembarks on what the cross of Christ means for Jesus’s people. When taking on the book as a reader/learner one will walk away with a deepened appreciation of who Jesus is, what he has done, is doing and will do. In short, the receptive will not have a better Jesus but will come to have Jesus better.

Yet from another standpoint, “The Day the Revolution Began” addresses a central issue that the author feels is highly troubling in modern Christianity. In Wright’s words, this is the “Platonized views of salvation, the moralizing reduction of the human plight, and ultimately the paganized views of how salvation is accomplished.” The danger he sees in this three-fold idiosyncrasy is that the “first blunts the leading edge of the revolution. The second treats one part of the problem as if it were the whole thing. The third produces a distorted parody of the true biblical picture” (94). This diagnosis skillfully sculpts the contours of the book, sallies forth in almost every chapter, and is thoughtfully ameliorated at every turn.

There are several questions the book raises in my mind, some purposely and others consequentially. A few were clearly solved, and others remained unrequited. For example, Wright raises alarms against what has characteristically been known as “the covenant of works” replacing it with what he categorized as “the covenant of vocation.” By the end of “The Day the Revolution Began” I found myself wondering if the author was addressing some aberration of the covenant of works, or was he simply being controversial to create interest and sell books. I found it hard to distinguish between his covenant of vocation from the classic doctrine of the covenant of works. I came to the same question mark with regard to how he displayed the wrath of God, where he pitted a paganized angry god against God’s justified wrath “meted out on Jesus, so that those who trust in him may escape that wrath; so that, with divine justice “satisfied” by Jesus’s death, God can justify people justly” (300). Again, the doubt came because I wasn’t sure if he was sparring with some popular anomaly, or merely attempting to pique concentration.

Then there were difficulties Wright raised at the beginning of the book that were worked out later. Two major subjects, out of a few, were the usual suspects: justification and penal substitution. Both, in fairly typical Wrightian fashion, get knocked about in the first portion of “The Day the Revolution Began” but then come to be well answered in the two chapters dealing with Romans. Though the author’s conclusions on these two doctrines were not as tight as my Calvinist-Reformed heart would like, they did appear to fall inside the borders and boundaries of a broad, classic Protestantism, and within the wider edges of mere Christianity.

Honestly, “The Day the Revolution Began” was a long, labor-intensive read, but it was still fertile and stimulating. By yanking the cross out of the hands of the thinner “me and my salvation” outlook and drawing together a larger sense of the cross of Christ, Wright helps to show how the word of the cross really is the power of God to those who are being saved (1 Corinthians 1.18). Whether one comes to agree with every plant the author has sown in his garden plot, nevertheless there will still be much to harvest, lots to serve up, and even more to take to heart.
Book Review Christ Crucified Crucifixion N. T. Wright