"The End of Protestantism" By Peter J. Leithart. A Review 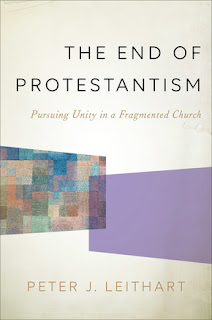 From early on as an ordained Presbyterian minister, I have cultivated friendships across denominational lines. While standing out in front of an abortion clinic in Texas every week for ten years, I made good friends with Roman Catholics. I was a member of a ministerial alliance for several years, even functioning as the President for two of those years. For the last two years I have met monthly with Baptist, Nazarene, Methodist, Presbyterian, and Disciples of Christ ministers to pray for one another, our churches and our city. Just recently I invited a dear friend, an African-American United Methodist minister, to preach at my Installation service where I was installed as the new Senior Pastor. For nearly fourteen years I have led two congregations to pray Sunday-by-Sunday for every local church in their respective cities. All of this, and far more, is fueled by the biblical thought that Christ established one church, and we are, where possible, to aim for that visible and functional unity. And that is the focus of the new 240 page hardback, “The End of Protestantism: Pursuing Unity in a Fragmented Church” penned by Peter J. Leithart, president of Theopolis Institute in Birmingham, Alabama and adjunct senior fellow of theology and literature at New Saint Andrews College. This volume is clearly thought-out and composed for pastors and parishioners alike. It is historical, theological, biblical, and pastoral.

“The End of Protestantism” takes its lead from Jesus’ prayer in John 17, where our Lord petitions the Father for a unified church so that the entire world will believe the Father sent the Son, and that he has loved us as he loves the Son (John 17.20-23). Leithart’s presupposition is that the Father will affirmatively answer the Son’s request and make sure this ecclesiastical unity, this churchly indwelling, will come to completion. As the author describes it, the unity of the church “is not an invisible reality that renders visible things irrelevant. It is a future reality that gives present actions their orientation”(19). Therefore Christians are obligated to “strive for future unity now, prayerfully trusting God to achieve it both now and more perfectly at the end of all things” (ibid.). With this in mind the author gives a diagnosis of the present situation, specifically of American Denominationalism; and provides a series of provisional projections of how to move in a more united direction.

Leithart’s diagnosis of the American denominational scene is very insightful on many levels. As he works through the pros and cons of American Denominationalism, the author teases out the historical trends that bred denominational Christianity in America, showing the theological rationale that was used to justify and fortify it. He further claims that this ecclesiastical pluralism builds into itself a specialization and competition that institutionalizes division. This boundary-marking “has two damaging effects on the church. On the one hand, denominational churches are homogenous and uniflavored and therefore immature. They are not bodies but collections of eyes, hands, brains, and other dismembered parts. On the other hand, they are set off from each other by a host of symbolic barriers. Symbolically divided, they have few obstacles to further divisions” (73). Since the boundary-marking, specialization and competition foster homogeneity, they then promote racial, economic and social separateness, because potential church-joiners want to be with their own kind, where it’s comfortable. Therefore, Denominationalism “encourages irresponsibility among the churches” (78), “infantilizes the church” (79), propagates “schismogenesis” where small differences become exaggerated and hardened (81), “softens prophetic voices that might be raised against America” (86), and organizationally maintains racial divisions (90-93).

“The End of Protestantism” then turns to look for a way forward. Leithart shows how the geo-ecclesial picture is changing dramatically; how over “the past century, God has remapped and rearranged and redistributed his church” (122). He tours the restructuring that is presently happening in Global Christianity, how it “breaks down old barriers” (128), is already coming to the United States, shifting and de-Europeanizing Christianity on American soil (133-148). How, also, there are new alliances emerging that include Protestant, Catholic and Orthodox, an “ecumenism of the street and the picket line” (160). In other words, “God is remapping the Christian world under our very feet, tearing down the old to make way for the new, and we must prayerfully follow the Spirit on the way toward unity.” But that reunion will not be of our own making, negotiating, or consensus building, since reunion, “when it comes, will be the gift of God, a work of the Spirit” (165). And that reunion will not be accomplished by crossing the Tiber or moving to Constantinople, but through the biblical and Spirit-guided re-formation of Christ’s catholic/universal church.

From this assumption, the author sketches out a fairly detailed model for thinking about, and attempting, a reformational reintegration. He drafts a provisional prototype that he calls a federative catholicity, which “focuses on common action and does not require intercommunion, mutual recognition of ministries and sacraments, or doctrinal uniformity.” Instead it helps churches to “work and worship together as much as each church is able” (166). Many of the details the author works out are very practical. Yet none of his suggestions call for downplaying, ignoring or loosening doctrinal commitments. Rather, he posits that there must “be a way of insisting on doctrinal truth while simultaneously striving to overcome doctrinal division” (173).

There’s plenty between the covers of this work that may well rile some folk’s rancor, whether they’re Catholics, Orthodox, Protestant, Arminian, Calvinists, Covenantalists, Dispensationalists, Pentecostals, Baptists, Presbyterians, Anglicans, or Lutherans. But in the end – whether you disagree with Leithart’s suggestions and models or not – there is a solid Biblical ground for the “whys” and “wherefores” of “The End of Protestantism,” and that solid ground is our Lord Jesus, his cross and resurrection, his prayer, and the essential belief that the Father will answer his Son’s prayer. And it’s this biblical grounding that brings the author to plead with readers, and especially his own kind (Presbyterian and Reformed); “I am urging my tribe to grow out of its tribalism. It is time to bring Protestantism to its end by turning Protestants into Reformational Catholics” (172). It is a book well worth taking up, reading, wrestling with, and responding to. Get a copy and go for it!

Thanks to Brazos Press for providing, upon my request, the free copy of “The End of Protestantism” used for this review. The assessments are mine given without restrictions or requirements (as per Federal Trade Commission’s 16 CFR, Part 255).
Book Review Denominations Peter Leithart Prayer for Unity