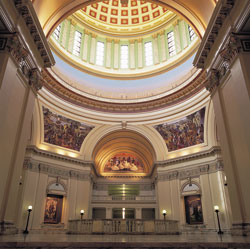 (Versions of this was presented at Heritage Presbyterian Church on 27 November 2016; and to the Capitol Forum on 30 November 2016)

John Kralik wrote a book, “A Simple Act of Gratitude,” where he recounts some of his story. Here was a guy whose life was a disaster: miserable, broke, overweight, on his second divorce, living in a rundown apartment with no air conditioning. He was an attorney, but couldn’t pay his employees their Christmas bonuses because his clients weren’t paying their bills on time or weren’t paying them at all. But one New Year’s day, Kralik had a moment of enlightenment; He’d start finding a reason to be thankful and grateful every single day, and would write one thank you note to someone each day of the year. Things have since turned around for Kralik, and he observes, “Gratitude presses outwards and that creates good feelings in the universe. A lot of that comes back to you eventually.” I’m not recommending the book, as much as I am the concept that our being a thanksgiving people is a biblical and beautiful thing.

Thanksgiving in Prayer (Colossians 1.3, 12, and 4.2): As Paul undertakes to write this letter, he shows us his own heart, since he immediately goes to thanksgiving: “We always thank God, the Father of our Lord Jesus Christ, when we pray for you” (1.3). It was a regular part of his praying to think of reasons for gratitude with regard to these Christians he’d likely never met but only heard of. We know this is not a throwaway sentiment because in each chapter he comes back to thanksgiving.

So, starting in v.9, we have a sample of how he remembers them in prayer with thanksgiving: “we have not ceased to pray for you, asking that…giving thanks to the Father, who has qualified you to share in the inheritance of the saints in light. He has delivered us from the domain of darkness and transferred us to the kingdom of his beloved Son, in whom we have redemption, the forgiveness of sins” (1.12-14). He doesn’t likely know these folks personally, but he can’t help but be grateful – and here his thanksgiving is for what God has done for them. “The kinds of things for which Paul thanks God are the kinds of things for which Paul asks…The frequency with which he links his thanksgiving for signs of grace in the lives of this or that group of believers, with his petitions for more signs of grace in the lives of the same believers, cannot be accidental” (D.A. Carson, “A Call to Spiritual Renewal,” 99-100). Paul prays for these disciples to grow fuller in Christ’s and the Father’s resources, and gives thanks for it happening.

Finally, as Paul begins to wind down his letter he comes back to this theme and pattern and invites the Colossian disciples to join with him in thanksgiving in prayer: “Continue steadfastly in prayer, being watchful in it with thanksgiving” (4.2). Like a hunter on a deer stand, or a referee in a ball game, we’re to be “watchful” in our prayers with the goal of gratitude! Thanksgiving in prayer!

Thanksgiving in Life (Colossians 2.6-7; 3.17): Next Paul moves, in the second chapter, to encourage them to a deeper, fuller, more firmly-grounded life in Christ, and watch how thanksgiving crops up: “Therefore, as you received Christ Jesus the Lord, so walk in him, rooted and built up in him and established in the faith, just as you were taught, abounding in thanksgiving” (2.6-7). The pattern of our Christian walk is all wrapped up in gratitude: abounding in the rootedness, the fruit-bearing, the Faith, the lived-out-life of reliance on Christ with thanksgiving! Our life is thanksgiving (guilt à grace à gratitude). 1 Thessalonians 5.16-18. Yes, our lives are thanksgiving: “And whatever you do, in word or deed, do everything in the name of the Lord Jesus, giving thanks to God the Father through him” (3.17). Doing – in word or deed – doing it all in the name of, for the honor of, the Lord Jesus, and merging with that is “giving thanks” to the Father through the Jesus our lives are lived in honor of.

How fitting, then, to be known as a thanksgiving people. Not grateful to nothingness and nobody but grateful to God who has liberated us, adopted us, forgiveness us, claimed us, commissioned us. Grateful to Christ through whom we have all of these gems and godsends. Grateful at all times and in all places, but not – like Kalik – expecting it will come back to us, but doing it because, simply, it’s good and right and faith-filled. And that thanksgiving, then, becomes part of our fiber and formation; and becomes felt and smelt all around us, and becomes an integral part of our witness of the Faithful Lord. “Oh give thanks to the LORD; call upon his name; make known his deeds among the peoples!... Oh give thanks to the LORD, for he is good; for his steadfast love endures forever” (1 Chronicles 16.8 and 34)!

(An audio version of this can be found here)
Thanksgiving People