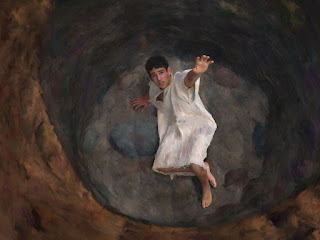 This morning I was reading Genesis 37. There in that oddly familiar story of a highly dysfunctional family – a father (Jacob) playing favorites between his sons (Joseph over the other brothers) along with the resentment that leads to the betrayal of family loyalties and brutalizing family love (Joseph sold into slavery by his brothers) – there is something going on unseen and unobserved. In this hot mess and human madness God is working. “Impossible!” someone will likely say, and they would seem to be correct. Up to our eyeballs in the hot mess and human madness, where all we see is manipulation, machinations and vengeful maneuvers, it is clearly impossible that God could actually be working. It’s not until the latter end of the story that it begins to show up. There’s the classic line from Joseph, where, in fulfillment of his two dreams, his brothers and father have bowed to him that he will say, “Do not fear, for am I in the place of God? As for you, you meant evil against me, but God meant it for good, to bring it about that many people should be kept alive, as they are today. So do not fear; I will provide for you and your little ones” (Genesis 50.19-21).

But before you yawn sleepily and move on there is another passage. It’s in the Bible’s five-volume hymnbook. It’s while skipping along through Psalm 105 the worshiper trips on these verses, “[The LORD] had sent a man ahead of them, Joseph, who was sold as a slave. His feet were hurt with fetters; his neck was put in a collar of iron; until what he had said came to pass, the word of the LORD tested him” (Psalm 105.17-19). Think through the oddity of v.17. The LORD sent Joseph through the human madness and hot messiness of enslaving Joseph. What?!? God is sending Joseph and the brothers are enslaving Joseph. Here we stub our toes on the mysterious choreography of God’s plan and human proceedings. Though you can’t see it, nevertheless God – hidden and obscured to our perceptions – is subtly working out what is good. The same thing gets nailed down for us at the cross of Christ! There is the One on the cross crying out, “My God, My God, why have you forsaken me?” In all the human madness and hot messiness there’s simply no way God is anywhere in town. But 50 days later, after Jesus has been raised from the dead and crowned as King of kings and Lord of lords, Peter perceptively says, “this Jesus, delivered up according to the definite plan and foreknowledge of God, you crucified and killed by the hands of lawless men” (Acts 2.23). God does work in the hot mess and human madness, simply look at the cross!

Now, go back to Psalm 105.18-19. The reference there is to the two dreams Joseph had. During the years upon years of enslavement and imprisonment, something else was going on, “His feet were hurt with fetters; his neck was put in a collar of iron; until what he had said came to pass, the word of the LORD tested him.” The word of the LORD in those two dreams, were testing him! No doubt Joseph thought of those dreams, prayed and threw those dreams heavenward, something like “But you promised! How in the world can you possibly bring those about? Have I mistrusted you? Are you unable? I’m dying here, LORD, and I feel like you are taunting me with your words!” In the end, during the rising waves of hot mess and human madness, the word of the LORD tests us as well. But the Bible’s consistent theme is that what the reliable God says, the reliable God does. Even when we are sputtering and gagging in the rising waves of the hot mess and human madness, our hope, our courage, our tenacity, our durability arises out of God’s reliability, and that he is even working in the mess and madness, “[The LORD] had sent a man ahead of them, Joseph, who was sold as a slave.”  Or as Peter prayed in another place, “truly in this city there were gathered together against your holy servant Jesus, whom you anointed, both Herod and Pontius Pilate, along with the Gentiles and the peoples of Israel, to do whatever your hand and your plan had predestined to take place” (Acts 4.27-28). That word of the LORD, that God is reliable and trustworthy, may well test us. But in the end what the reliable God says, the reliable God does.

Therefore, if you’re up to your eyeballs and ears in a hot mess and human madness, look to the God who works – often unseen and unobserved – in it. And if you find it hard to believe it’s possible, look to the cross and the empty tomb!