"Attack the Attack" by Jeff Burger (DVD). A Review 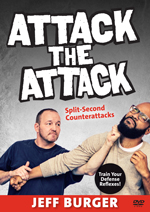 His fist flew menacingly through the air toward my face. Instinctively I parried it, grabbed his wrist, turned under his momentum and threw him across my shoulders over onto his back. Though he was 50 pounds heavier than me, and taller by several inches, the fight ended in a split second because my reaction was automatic and aggressive.  That’s the point and focus of the new 93 minute DVD, “Attack the Attack” by Jeff Burger, an instructor in Karate, Ju Jutsu, Muay Thai, and Kung Fu for over 30 years. The training material is meant for easy retention and quick mastery, with loads of demonstration.

“Attack the Attack” begins with the principial aspects of the program: mental, conceptual, and physical. Burger goes on to cover the importance of growing competent through practice, and visualizing the outcome. He also discusses and displays the potential picture of an attacker coming at various speeds and angles, and where to be as soon as the attack arrives. Then he breaks down various blocks – both constructive and destructive, as well as evasions and strikes, while emphasizing that the goal is to do them simultaneously. The information is simple, with sufficient explanation that can be followed through with immediately. Instead of filling the mind with multiple steps and forms that will breakdown in the middle of an assault and adrenalin-dump, Burger hands the viewer short, unfussy actions that can be quickly accomplished.

“Attack the Attack” is an easy to understand visual instruction on self-defense. If you want to augment your personal safety, or are just beginning to think about self-protection, this is a good, inexpensive place to begin. Also, if you’re running a martial arts school or dojo and want to supplement your students’ training, obtaining a copy of this DVD would be the right thing to do. I highly recommend “Attack the Attack”.

Thanks to YMAA Publication for providing, upon my request, the free copy of “Attack the Attack” used for this review. The assessments are mine given without restrictions or requirements (as per Federal Trade Commission’s 16 CFR, Part 255).
Jeff Burger Martial Arts Self-defense