"Heal Us, Emmanuel" by Doug Serven, General Editor. A Review 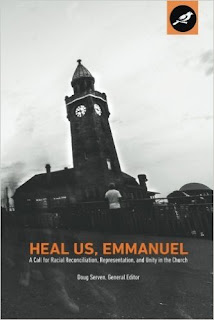 Shrill with a Side of Sane; 3 stars of 5

I couldn’t believe what I was just hearing. I had recently retired after spending 20 years of enlistment in the U.S. Air Force, working side-by-side with men and women from all kinds of ethnic backgrounds, and was about to become ordained in the Presbyterian Church in America (PCA). And here was an elder in what would be my first PCA church, surrounded by the whole eldership, telling me I was not allowed to invite “any of those people to this church”! The same elder later told me that he was not convinced that “those people” were fully human! Then some time later another elder stood with me on the church steps trying to educate me in the finer points of life in this small southern town, by proving to me that “those people” who made up 90% of the town’s population, were really immoral and horrible sinners. When I asked him to clarify, he gave me examples of drug use, fornication and loud music blaring from their vehicles. When I challenged this by pointing out that the folks on the white side of town did the same things (his own 40-something son had just come out of a drug rehab), he spewed out, “No! Those people are the ones who are really sinful!” Needless to say, it was a difficult church experience.

Not to be stymied I walked down to the police station, and offered myself to the black police chief to be the chaplain for the all-black police department. I joined the mixed race volunteer fire department, and fought fires shoulder-to-shoulder with black and white firefighters on both the black and white sides of town. And I met with the black mayor. I found out, to my surprise, that none of the African-American pastors lived anywhere close to town, and so I asked him if he would like me to meet with him every week and not talk politics, but just pray. He was stunned, but agreed and we prayed together every week for over three years. Some six years after I moved away, he called me in Midland, Texas, after his doctor told him he had a brain tumor and asked me to pray for him.

I recount all of these scenarios to say that there are still problems in our world, and even in my denomination with regard to race; and to show that this subject is dear to me and I have been doing something about it for years. So when the General Editor, Doug Serven, pastor of City Presbyterian Church in Oklahoma City, OK and author, handed me a copy of the 326 page paperback “Heal Us, Emmanuel: A Call for Racial Reconciliation, Representation, and Unity in the Church,” I was hopeful that this might be a valuable resource. Pastor Serven has even designated the profits from the book to support minority student and staff development for our denomination’s Reformed University Fellowship.

“Heal Us, Emmanuel” breaks down into four sections. The first portion invites the reader to listen. It contains five chapters telling personal stories of pilgrimage, struggle, concern, challenge and direction. There are accusations of white microaggressions, invitations to confession and repentance, reminders that the church is to care about justice, and the story of forgiveness exhibited by the members of Emanuel African Methodist Episcopal Church, Charleston, SC after Dylann Roof brutally murdered nine of our brothers and sisters.

The next section challenges us to recognize White Privilege, and much of what that means. The authors recount the historical place of race in America, and how even the poorest white person benefited from being part of the majority population. There are numerous requests to not only identify White Privilege, but to begin sharing power with other ethnic groups. Rev. Sam Wheatley of New Song Presbyterian Church in Salt Lake City, beckons us to understand “where we have been entrusted with power and creatively plot how to share, loan, or give that power to others we would have previously considered a problem” (82).

Afterwards comes the unit unpacking our sins of omission and commission. The authors draw attention to the subtle, and not always subtle, ways racism has shown up in America and among American Christians. And these chapters recount the various experiences of how congregations and individuals have tried to remediate the racism where they are. Rightly, Ruling Elder Samuel Graham, of independent Presbyterian Church in Memphis, remarks that we “cannot undo that which has been done. We can, however, be faithful today whenever we see injustice” (113). And Rev. Chris Granberry, Pastor of Hope Fellowship on the Yakama Reservation in Washington, wisely observes that to “do justice means we engage in the fight against injustice in a certain area. We pray and take baby steps” (138).

Following this, “Heal Us, Emanuel” turns to chronological and theological perspectives. These chapters are heavily historical from within our American Presbyterian context. The racist and segregationist positions of old heroes, and one or two still living, are addressed and called out. There is plenty of “backed-up” material here to bring the most headstrong to bow their heads and wonder how this could have happened.

The theme of confession and reconciliation have been trumpeted through the book, and now come into their own section. The solicitations for a personal, congregational and/or denominational confession of sin and resultant move to reconciliation are gentle and generally restrained. Stories abound, but most have to do with the life-tales of how each of these authors have striven to exhibit some sense of being multiethnic in their congregations.

The book ends with prescriptions for the way forward. This final section is not a set of checklists, but more a series of examples on how “to talk less and to listen more to the minority voice” (275). And, as Rev. Scott Sauls, Senior Minister of Christ Presbyterian Church in Nashville, states it, to extend real charity, the kind that “must result in empowerment, where the majority humbles and positions itself to follow the minority voice regularly” (276).

In the end, “Hear Us, Emmanuel” was not the book I expected. Instead of being a conversation starter, it was often a protest piece: shrill with a side of sane. Several authors threw rocks inside their glass houses, and then when the shards of glass blew back at them and stung them they cried “White Privilege.” For example, one author, a member in a Korean Presbytery, where all of the senior and solo pastors listed are Korean and all of the leadership pictured on his home-church’s web page are all Asian, shamed white Christians for microaggressions. I was sorely disappointed with this approach because it followed more of a Darwinian mindset of conflict and competition, survival of the fittest, struggle and supremacy that I expected to hear from my time in a secular Air Force, or coming from the National Education Association, EEOC, etc. He even defined racism in such a way as, inadvertently I hope, to excuse himself and accuse white Christians; “I would argue that while everyone has some level of prejudice –against people who are different from them-racism refers specifically to privilege and power within a system of dominance. Racism is prejudice multiplied by power” (26). By the end of this chapter it was obvious that a white reader was damned: damned if they speak, damned if they hold their tongue, damned to be white. If that wasn’t the author’s intention, it still was the combative way he came across. There were several other chapters that made it hard to read the book because of the shrill tone.

On the other hand, there was a side of sane to “Heal Us, Emmanuel,” those who spoke less emotively. Though I didn’t agree with everything they wrote, nevertheless I felt like after reading Higgins, Long, Granberry, Lucas, Castro, and Ince, to name a few, I could have sat down with them and conversed, challenged and been safely and caringly challenged by them.  Almost all of the historical and theological section was this way, and a few chapters sprinkled here and there.

“Heal Us, Emmanuel” wants desperately to be a conversation starter on the subject of race and racism in the Presbyterian Church in America. It may well speak to the hearts of some, but it will likely slam the door on the fingers of others. Therefore, as a conversation starter I feel it is difficult to recommend the book because of the deafeningly shrill, though the side of sane was very helpful. But if you’re looking for a protest book, then this may be the volume for you.

My thanks to Doug Serven and White Blackbird Books for providing the free copy of “Heal Us, Emmanuel” used for this review. The assessments are mine given without restrictions or requirements (as per Federal Trade Commission’s 16 CFR, Part 255).