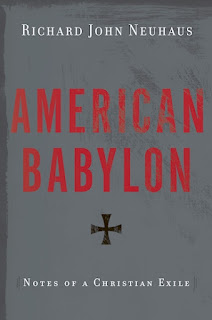 As we approach another annual commemoration of Independence Day, Christians may be asking “How do we relate to our country?” And if they’re not asking this, they ought to be.  In 2008 Richard John Neuhaus, Lutheran pastor turned Roman Catholic priest, prolific writer, president of the Institute on Religion and Public Life, and founder/editor of First Things, pushed forward a work meant to help Christians think through their relationship and role in this country. This 270 page hardback, “American Babylon: Notes of a Christian Exile,” was published two months after his decease (January 8, 2009). In many ways it reads like the final words of a dying father to his children.

“American Babylon” is shaped by Jeremiah’s letter to the Babylonian exiles in Jeremiah 29, and Neuhaus takes this as the story of our present situation. Christians are pilgrims, exiles, strangers in a strange land, who – because of Christ incarnate, crucified and resurrected – live in the present while being bonded with the future; “The present is, so to speak, pregnant with the promised future” (15). And so, recognizing that “Babylon” will continue until finally and fully displaced with the New Jerusalem, Christians are to develop an “Augustinian sensibility,” “the sensibility of the pilgrim through time who resolutely resists the temptation to despair in the face of history’s disappointments and tragedies, and just as resolutely declines the delusion of having arrived at history’s end” (23).

One of the concerns Neuhaus voices is the melding and wedding of America and the Church, which eventually has turned America into a church-substitute; “American theology has suffered from an ecclesiological deficit, leading to an ecclesiological substitution of America for the Church in time” (41). As he notes a little further on, we see “again and again that, without a Church that is not notional but real, without a Church that bears a promise and a purpose that transcend the American experience, the American experience itself, in ways both subtle and vulgar, offers itself as a substitute church” (50). It’s only when we come to recognize that we live in the ruins of Babel, where the politics of the City of Man is “marked by rival claims to truth in conflict” (185) that we can be freed up to develop “Augustinian sensibilities.”

“American Babylon” tackles several poignant issues, like atheism and citizenship, Rorty and postmodernism, to name a few. But in the end, Neuhaus left us with a way to have a “disciplined skepticism about politics” that doesn’t breed cynicism, but wisdom (185); tools to help us appreciate that our Christian faith “does not relieve but intensifies our dissatisfaction with tings as they are” (247) because we live with a dual citizenship. What Neuhaus wanted most of all was to guide his readers to have a properly placed hope that will dispel hopelessness; “This is the heroic hope of the saints, grounded not in self-confidence but in identification with a narrative other than our own – the narrative of Christ crucified, risen, and returning in glory” (239).

There is no doubt that Christian readers from the various streams that flow within Christianity will take issue with this conclusion or that assertion. As a Protestant minister I am cognizant of the Roman Catholic sense that colors some of the suppositions and sentiments Neuhaus proposed. Nevertheless there is a weighty sagacity and sanity between the covers of this book that will benefit all of Christ’s people who live in America. I highly recommend this volume. And in honor of Fr. Richard John Neuhaus, I leave the reader with some of the author’s concluding statements: “We are moving toward our destination, and our destination is moving toward us…As Christians and as Americans, in this our awkward duality of citizenship, we seek to be faithful in a time not of our choosing but of our testing. We resist the hubris of presuming that it is a definitive time and place of historical promise or tragedy, but it is our time and place” (250).

Feel free to re-post or republish this review; and as always, please give credit where credit is due. Mike
American Babylon Book Review Richard John Neuhaus