"Unchanging Witness" by Fortson and Grams. A Review. 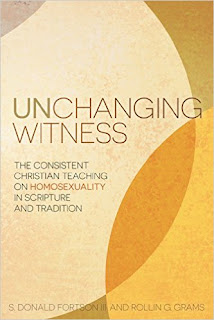 Based on reports from news broadcasts, tabloids, cultured journals, enlightened bureaucrats, sitcoms, singers and social media, it looks as if it’s an open and shut, clear cut case of social justice. It’s only the coarse troglodytes, communal cave-dwellers, and clichéd sticklers who linger around the sides and shadows of our brave new world, and make peevish and prejudiced protests. But fear not, we’re assured, for the moral high-ground has been claimed by throngs of the liberated and learned. Why, even the astute and approachable churches in the U.S.A. have “seen the light” and joined the prize-winning powers. So the tale is told. But S. Donald Fortson III, Professor of Church History and Practical Theology and Director of the Doctor of Ministry Program at Reformed Theological Seminary, along with Rollin G. Grams, Associate Professor of New Testament and the Director of the Robert C. Cooley Center for the Study of Early Christianity at Gordon-Conwell Theological Seminary in Charlotte, North Carolina, have nailed their strongly stated and robustly reasoned theses on the church’s door in their new 448 page paperback, “Unchanging Witness: The Consistent Christian Teaching on Homosexuality in Scripture and Tradition.”

“Unchanging Witness” divides into twin sections taking on, first, the church’s ageless and historical position on homosexuality; and second, the scriptural attestations. The intended aim of the book is the authors’ call to the church to return to reality; “We issue that call by saying what God has said in his Word and by presenting what the church has affirmed throughout its history” (1-2).

In the first part of the volume, Fortson gives historical background to the present condition of the Christian Church on this matter. He then walks the reader through heavily quoted source documents from the Patristic era, the Middle Ages, into the Renaissance and Reformation, while examining the erroneous allegations made by John Boswell and others. Finally, the author extensively surveys the various official and stated proclamations from Roman Catholic and Eastern Orthodox sources, along with Evangelicals, and then Mainline denominations. Each chapter robustly draws from original documents cited in full context so that one walks away presented with a solid historical case. By the end of the first part, it is clearly obvious that Christianity has sturdily stood firm on the immorality of homosexuality in all of its varied manifestations. By the end of this portion of the book I was profoundly encouraged.

The second part of “Unchanging Witness” turns to the Bible, where Grams addresses and lays bare the claims of Luke Timothy Johnson, Walter Wink, Jack Rogers and a host of others. The author overwhelmingly shows that the Bible, from the Hebrew Scriptures through the New Testament, held an unflinchingly consistent sexual ethic of which homosexuality was one violation. Also, the Scripture’s moral position on this subject daringly stood in antithesis to the surrounding mores. This leads Grams to helpfully point out that though the totality of Scripture may only specifically mention homosexuality a handful of times, nevertheless, once the Christian recognizes and “understands that there is a biblical sexual ethic—sex is for a man and a woman in marriage—then one grasps that all general statements forbidding sexual sin cover every act between two people other than that which is allowed” (199). The good news is that since homosexuality, in its sundry and assorted expressions, is sin in God’s eyes, there is hope, and the hope is found in God’s antidote. In his eternal Son becoming fully human like us in every possible way, with the exception of sin; who humbled himself and was obedient to the Father, died for the sins of his people, was raised from the dead on the third day, ascended to the Father’s right hand, and has poured out on his people the heart-transforming, lifestyle-changing Holy Spirit! The remedy to this and any sin is found in Jesus Christ as we rely on him and submit to him.

In the end, “Unchanging Witness” is an engulfing book that leaves daring and diligent readers with important decisions. This is a book meant to help faithful Christians to stand face-forward in the raging storm. It is also meant to give those who have been uncertain a robust and resilient confidence. Finally, it confronts those Christians who are hardened in their pro-homosexual position; “the challenge of the pro-homosexual advocates in parts of Western Christianity extends beyond their view of homosexuality. These advocates not only challenge the orthodox teaching of the church through the centuries; they also challenge scriptural authority, the Bible’s teaching on human sinfulness, the work of Christ on the cross, and the transformative power at work in believers’ lives through Christ and the Holy Spirit. In a word, these advocates challenge the essence of the gospel” (376). This book is a must for every Christian pastor, seminary professor, theologian, academic library, and follower of Jesus.

Thanks to B&H Publishing Group for providing, upon my request, the free copy of “Unchanging Witness” used for this review. The assessments are mine given without restrictions or requirements (as per Federal Trade Commission’s 16 CFR, Part 255).

(You have my permission to repost and reprint this review. Simply give credit where credit is due. Mike)
Book Review Fortson Grams Homosexuality and Church History Homosexuality and the Bible Unchanging Witness