The Father and Son and Holy Ghost are Busy! 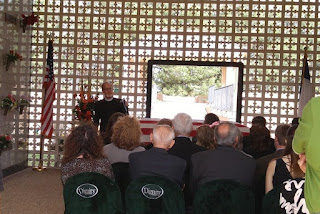 (The following is a sketch of what I said at the funeral for Fr. Charles E. Hageman, on 14 March 2016. The picture above is at the graveside service in Midland, TX. This was the same homily I used at his wife's funeral in August 2005).

The Father, the Son and the Holy Ghost are busy! They’re all over this passage, busily doing something. Why are they so busy? Because sin is just killing us! As the Apostles says just a few chapters earlier, “Therefore, just as sin came into the world through one man, and death through sin, and so death spread to all men because all sinned” (Romans 5.12). Just as the old New England Primer from the 1600s used to say, “In Adam’s Fall, We Sinned All”. But more than that, there is something of an algorithmic progression: Sin ->Suffering -> death.

In the words of Psalm 90, “…we bring our years to an end, as it were a tale that is told. The days of our age are threescore years and ten; and though men be so strong that they come to fourscore years, yet is their strength then but labour and sorrow; so soon passeth it away, and we are gone” (BCP Psalm 90.9, 10). The Father, Son and Holy Ghost are busy because sin is just killing us!

Because of the love of the Father, thru Jesus, by the Holy Ghost:

But also, suffering and death are temporary, breaking out into something greater; something more marvelous and magnificent (8.17-18).

Nothing can take that away from us! Just because we may forget our identity – God doesn’t forget it - because he gave it to us!

O GOD, whose blessed Son was manifested that he might destroy the works of the devil, and make us the sons of God, and heirs of eternal life; Grant us, we beseech thee, that, having this hope, we may purify ourselves, even as he is pure; that, when he shall appear again with power and great glory, we may be made like unto him in his eternal and glorious kingdom; where with thee, O Father, and thee, O Holy Ghost, he liveth and reigneth, ever one God, world without end. Amen (BCP 6th Sunday After the Epiphany).