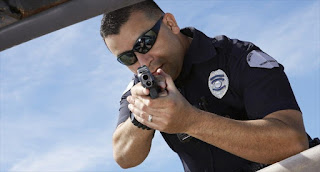 Many years ago I was a cop in the U.S. Air Force. We were charged with guarding a “Priority A” facility, a site that was high-up in the chain of national security, and also way off the beaten path. You either got there because you were terribly lost, or you were there with intention (good intention, or otherwise). On every fence, and at the three entrances, were signs stating that it was a military installation and deadly force could be employed. One dark evening, at around 11 PM, the shift Sergeant called me for back up. We were in one of the main entry points and just outside the building was the dimly lit parking lot. We could make out someone lurking around the parked cars and looking suspicious. We went out to meet the individual, I with my Combat .38 caliber revolver (no safety, and no “locking and loading”), and the Sergeant with his M-16 rifle. I walked around the back of the cars to come up behind the person, while the Sergeant met him face to face. Things were just not right; the fellow was scared, evasive, wearing darker clothes, and looked out of place. We were able to get him into an area where the lights were better and away from passersby. It was in the full light we realized he was wearing a shoulder holster. We had him flanked, and the Sergeant asked him for identification. He immediately reached with his right hand to his shoulder holster. The Sergeant instantly aimed his rifle into the man’s face and I had my pistol out targeting him. This was the moment, and I was only 19. My eyes were probably the size of a saucer, and my heart rate was likely off the chart. Just before we fired the man froze and whimpered, “My I.D.’s in my bag,” and he pointed to the shoulder holster. It turned out that the shoulder holster was one of those man-purses that came into style and blew out of style within a year. Thankfully for this fellow, the Sergeant, and for me, no shots were fired, but it was closer than any of us wanted.

Unbeknown to the shift Sergeant and me, there was a Major from another unit watching the whole affair. The next day the Sergeant and I had to report to the Commander and we received a letter of appreciation for the way we handled the affair the night before. It appears that the Major wrote a letter to our Commander, explaining how close we were to shooting the fellow who had strayed onto military property, that the man’s actions justified our response, and that he (the Major) was impressed we had not shot the subject. In all of this there was a thin line.

In the past year (2015) there have been several occasions where police officers have used deadly force. It is horrendous when it happens. The person shot is no more and their family is changed forever; the officer(s) who did the shooting will never be the same and their own families are permanently affected. Why did the officer shoot? Was it justified? Did his/her prejudices come into play? Was he trigger-happy? Was she just itching to draw down on someone? Surely anyone can tell the difference between a pellet pistol, a toy weapon and a “real” gun, right? It’s all recognizable to us, sitting back in our homes with bright lights, warm and cozy, calmly watching the media reports that show clear, well-lit pictures. Obviously, then, the cop was the problem, right?

But being there in the coldness or rain or darkness; watching the actions of the person, where their hand goes, the way it goes inside the jacket, or behind them; sensing their muscles tense; seeing the way their hand is grasped on the handle of the weapon they’re pulling out. Or being there when the scuffle broke out and the subject’s hand reached for the officer’s pistol, while smashing in his face, or the side of his head. And there are a hundred other visual/audio/perceptual pieces to the picture that make the situation not so air-tight or clear-cut in the moment. It’s a thin line.

This is why after every shooting there is a review by the department and normally from at least one agency outside the police officer’s organization who understand the thin line. And then on top of that, some shooting incidents are examined by a Grand Jury. Usually the review system works well. Bad cops get prosecuted in a Court of Law; and Law Enforcement Officers who are able to show that the person shot gave the officer(s) reasons to believe that they had intent to do harm, capability to do harm, and opportunity to bring it about, are exonerated.

My concern is that several of the cases in 2015 have been tried in the media, Fox News, MSNBC, CBS, NBC, and a host of others. Many of these Law Enforcement Officers have been, and are being, prosecuted on Social Media, Facebook, Twitter, etc. And worst of all, some of those Sheriffs, Deputies, highway patrol officers and street cops who have been involved in a shooting are being presumed guilty until proven innocent (doesn’t that last line strike a nerve with you?). And the presumed guilt is getting declared by people who think they have all the facts and that the facts can be neatly and tidily arranged.

Are there bad cops out there? No doubt about it and several of them have been put behind bars in 2015. But there are loads and loads of good cops, the overwhelming majority of Law Enforcement Officers. Remember that there is an ordinarily ethical apparatus in place to gauge the rightness or wrongness of an officer’s actions when they have fired their weapon. Remember that the media doesn’t know all of the facts; social media certainly doesn’t know all of the facts; and neither do you are I. Remember that a person, including a Law Enforcement Officer, is innocent until proven guilty. And remember the thin line.


(If you would like to repost or republish this piece, then you are free to do so. But please give credit where credit is due. Thanks)
Law Enforcement