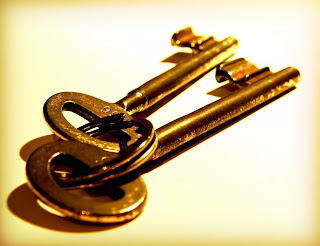 First off keys are about opening doors, and locking them shut; making things accessible and securing them from misuse. Jesus is in effect telling Peter that what he is giving to the church is this ability: what is locked up tight on earth will be, or will have been, locked in heaven. And what is set free on earth will be, or will have been, set free from heaven! Whatever else the keys are for, they are at the least for both securing and setting free.

[[A side note: If talking about the original language of the New testament baffles you, then skip to the next paragraph.The Greek is rather exciting here: ἔσται δεδεμένον (estai dedemenon), and ἔσται λελυμένον (estai lelumenon) is an odd combination of verb tenses. So estai is the future of “to be,” in other words, “will be”. But the other two verbs, dedemenon and lelumenon are perfect, passive participles (“have been bound, have been loosed”). So, how do you put together a “will be” and a “have been”?  I assume that the translators of the various translations have had fun with this, and many made the decision that because first verb of the verse is future tense (“I will give”) and all the other actions in this verse are future, that it makes sense to let the stress fall on the future (“shall be bound” and “shall be loosed”).  Just a quick glance at all the English translations says this is a pretty safe bet. Nevertheless, the Amplified Version, and the English Standard Version (footnotes) gives the possibility of a future-past tense, “will have been”. I’ll stick with the experts on this, while keeping the alternative translation loosely in the back of my head.]]

Then, in Matthew 18.18, though Jesus doesn’t mention the keys of the Kingdom, yet he does promise the apostles, “Truly, I say to you, whatever you bind on earth shall be bound in heaven, and whatever you loose on earth shall be loosed in heaven” (All the Greek-stuff mentioned above is going on here as well). This verse is spoken in the context of church discipline, excluding the unrepentant (binding) from the church’s fellowship, and restoring the repentant (loosing) to the fellowship. This seems to fit 16.19, which is about the church that will ride out the pounding storms and outlive the passing seasons; the church that the gates of hell, the powers of death or the devil, will never be able to overthrow. And so Peter (representing the other Apostles, and by derivation, all legitimate church officers) has the right and responsibility to secure the church from the impenitent, and open the church to the penitent.

As a Protestant, I think, then, that the Westminster Confession of Faith, gets it right when it states, “To these officers the keys of the kingdom of heaven are committed, by virtue whereof, they have power, respectively, to retain, and remit sins; to shut that kingdom against the impenitent, both by the Word, and censures; and to open it unto penitent sinners, by the ministry of the Gospel; and by absolution from censures, as occasion shall require” (30.2).

And so the keys of the Kingdom are about who’s in and who’s out; who is freed to enter God’s family, and who family membership is closed to. And that decision is heard in the Gospel of the Kingdom, when ministers fence the communion table (“here’s who can receive, and here’s who shouldn’t receive” – something almost every Christian denomination does in one way or the other). But the keys of the Kingdom – opening and closing – is also heard in the Gospel proclamation:

“The Father loves the Son and has given all things into his hand. Whoever believes in the Son has eternal life; whoever does not obey the Son shall not see life, but the wrath of God remains on him” (John 3.35-36).

“The time is fulfilled, and the kingdom of God is at hand; repent and believe in the gospel” (Mark 1:15).

“…if you confess with your mouth that Jesus is Lord and believe in your heart that God raised him from the dead, you will be saved. For with the heart one believes and is justified, and with the mouth one confesses and is saved… For “everyone who calls on the name of the Lord will be saved”” (Romans 10.9-13).

Repent of your revolt against God and embrace the Lord Jesus Christ and you will find your sins are washed away and you are in God’s family and that he delights to call you his child!

If you do not turn away from your rebellion to God and embrace Jesus the Lord, then you are still in your sins, and under the justified condemnation of God.
Are you in, or are you out?

Tony said…
Thanks for giving the congregation the opportunity to think deeper about this passage. ��
January 26, 2016 at 6:17 AM