"The Gospel of St. John" by J.B. Lightfoot. A Review 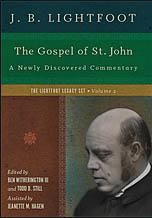 Long forgotten, lingering on the dust coated back shelves of the Durham Cathedral Library in the Monk’s Dormitory, there appears to be a treasure trove of works, files, and folders, along with blue boxes that contain unpublished material from the classic 19th Century New Testament scholar and Bishop of Durham, J.B. Lightfoot. The blue-box material is lecture notes on Acts, the Gospel according to St. John, 1 Peter and 2 Corinthians.  They are now being published by IVP Academic as “The Lightfoot Legacy Set” in three volumes and edited by Ben Witherington III and Todd D. Still. The newest work is the 371 page hardback, “The Gospel of St. John: A Newly Discovered Commentary” which is the second installment in the set.

The book begins with a short background forward by the editors, then picks up with the editors’ introduction where they describe Lightfoot’s work and methodology.  Next the manuscript includes a lecture Lightfoot gave on the “External and Internal Evidence of the Authenticity and Genuineness of the Fourth Gospel.” Here he goes toe-to-toe with the Tubingen School, and especially F.C. Baur, countering the charges made against the authenticity of John. Afterward comes Lightfoot’s commentary notes on the Gospel according to John, where he scratched out technical linguistic notes on the Greek and grammar. There are excurses where the Bishop delved deeper on subjects like the authenticity of John 7.53-8.11, as well as the authorship of the Gospel. It was interesting to read Lightfoot’s perception of the relationship of John to the Synoptic Gospels, penned in his own words; “The Synoptics are to be interpreted by St. John and not conversely, for St. John is precise and definite” (123). The one disappointment is that the commentary segment abruptly ends with his analysis of chapter 12.1-8. One wonders what else he would have said if he had been ale to complete the rest of his commentary. The book includes three appendices, the first two by Lightfoot that delve deeper into the authenticity of John. And the final piece is by Martin Hengel on “Lightfoot and German Scholarship.”

“The Gospel of St. John: A Newly Discovered Commentary” is a voice from the past to help interpreters of the present to speak to a world moving forward into an unknown future.  Though Lightfoot was dealing with an older incredulity and skepticism, nevertheless his observations and evaluations are helpful as we face similar suspicions and cynicisms. And his commentary shows the value of thoughtfully reading passages from the original languages. This would make a great addition to the library of your favorite seminarian or pastor. I heartily recommend the volume for more than just its historical value.

My gratitude to IVP Academic for the free copy of the book used in this review.
J.B. Lightfoot John