"Perichoresis and Personhood" by Charles C. Twombly. A Review 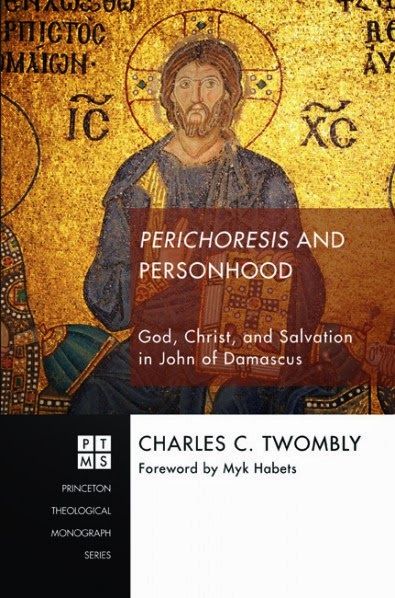 Most Christians in Church or parishioners in the pews have never heard of perichoresis. To them it will likely sound like a bad skin disease. But hopefully most pastors, theologians and Church history buffs are at least mildly familiar with the concept, recognizing that it is an extremely important notion with regard to the inner life of the Trinity. Charles C. Twombly, a historical theologian who has taught in several seminaries and has been published in Crux, Christianity Today and First Things, has pulled together a new addition to the Princeton Theological Monograph Series with his 132 page paperback, "Perichoresis and Personhood: God, Christ, and Salvation in John of Damascus." This densely argued work lays out John of Damascus's idea of perichoresis, and how it works in his teaching on the Trinity, Christology and soteriology. Those subjects make up the three central chapters of the work.

"Perichoresis and Personhood" examines "how a key theological term, perichoresis, functions in the thought of John of Damascus" (1). Yet the study goes deeper into the background bubbling up from the deep pool of Gregory Nazianzus, Athanasius, Leontius of Byzantium, Leontius of Jerusalem, and the councils of Chalcedon and Constantinople. Twombly's thought is that John of Damascus took an already existing term and concept, stretched it and filled it in, so that the term could give "greater clarity to the Trinity, the Incarnation, and salvation" (6).

The main idea is that perichoresis becomes a means by which "identity and difference" are maintained. Whether talking about the Trinity, Christology or God’s saving humans, there is an association that involves a relationship of mutual indwelling, but a mutual indwelling that is without confusion, blending, merging.; a union-without-absorption (42). Perichoresis "in a Trinitarian context refers to what is beyond creation," that is, God’s own inner relationships; but also is used to "express other relationships as well, most especially that of Christ's two natures." It can likewise be used, along with other terms, to express "the relation of humans to God in salvation" and "God's providential presence in the governance of the world" (27).

Though most readers-in-the-know  would connect perichoresis to the Trinity and Christology, the author emphasizes that John of Damascus applied the concept to human salvation; the salvation of specific people who, through the sacraments of baptism and the Eucharist, enter into union with Christ. This participation that holds together identity and difference, equates a person with Christ, without them being swallowed up in his divinity, or their absorbing him in their humanity (102). And this mutual indwelling of God and redeemed humans, this perichoretic relationship, reflects the Trinity’s inner relationship, for what “is true of God and of Christ by nature becomes in an appropriate measure available to humanity by grace” (105).

“Perichoresis and Personhood” will likely interest specialized readers, those interested in and trained in Church history; nevertheless with a little effort interested readers can make it through the book profitably. The technical language is explained and worked out, but a notepad and a pen lying close by will make it easier to track the flow of ideas and concepts and navigate the areas most confusing. Though there are annoying editorial glitches at places in the book, they should not keep this book from being useful to Seminary libraries, theologians, Patristic scholars, Church historians, or pastors. I recommend the book.

My thanks to Pickwick Publications and Wipf and Stock for the free copy of the book used for this review.
Book Review Perichoresis Salvation the Incarnation The Trinity Trinity

Charles Twombly said…
Would be happy to hear from you (and other readers) as to where the "editorial glitches" are to be found. I'm eager to have corrections made by the editors. (Merely citing page numbers would do the trick (I can go from there.)

Many thanks for a positive, helpful review. Have heard from professors at Chicago, Harvard, Columbia, Oxford, and Notre Dame who have made either personal or classroom use of my book. PTL.
December 17, 2019 at 10:49 AM