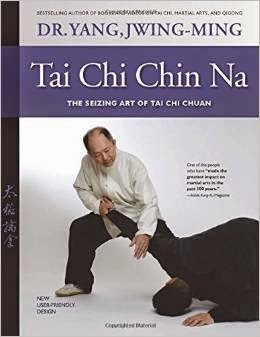 A martial arts practitioner can quickly get stuck in a rut. Doing the same kata week after week for months on end, learning to kick with precision and strike with exactness, going through the motions to learn various one-step training forms, and sweating through self-defense moves over and over, can rapidly bring one to think they’re learning all there is to a particular martial style. But a moment’s plunge into the 2nd edition of “Tai Chi Chin Na: The Seizing Art of Tai Chi Chuan” will expose the shallowness of such a perception. Dr. Yang, Jwing-Ming, renowned author and teacher of Chinese martial arts and Qigong, has reworked this 432 page paperback. He carefully explains the methods and metaphysics of tai chi chin na, and shows how chin na can be “adopted easily by almost all martial arts styles and blended into their own techniques” (xix).

The first two chapters of “Tai Chi Chin Na” cover the general concepts of chin na, which means “seize and control” (1), and the basic fighting theory of tai chi, which is “to use the soft against the hard, and to use the round to neutralize the straight or square” (Ibid.). The author works out the five categories of chin na; dividing or grabbing the muscle or tendon, misplacing the bone, sealing off the breath, pressing or sealing the artery or vein, and pressing the primary qi channel or cavity (5). These five categories build the framework for the later portions of the book. Dr. Yang explains the importance of the three fighting ranges – long, medium and short (31), as well as the way of circles in chin na – large, medium and small (32). By the reader grasping the ranges and circles early on will add to the execution of the moves explained later in the book, especially as they are applied to the eight technical moving patterns and five strategic directional movements.  By the end of the second chapter it is clear that this is a fairly technical book; technical with emphasis on technique and mechanics, but also the inner logic of positions and movements.

Chapters three through six take the reader deeper into the eight fundamental methods, from which “hundreds of techniques can be derived and developed” (63). Though these chapters can seem exhausting, they are not exhaustive, as the author is only introducing the reader to “some of the possible techniques” with which he is familiar (Ibid.). What this means is that there is plenty of material to work on in “Tai Chi Chin Na” that will last a learner a long time, and as they master the material they will find other ways and other uses for each procedure.  To aid the reader through these chapters, Dr. Yang carefully describes each step of the position or movement, the theory behind it, and attaches very clear pictures with directional indicators that are well-defined. The author expresses, explains and exhibits with such lucidity that, as he promises in the beginning of the book, “it can be learned easily, even by a martial arts beginner” (1).

“Tai Chi Chin Na” at first appears daunting by its sheer size, yet in relation to the number of pages there is a minimal amount of reading after the first two chapters.  Most of this book revolves around the instructive pictures and the Spartan verbal descriptions. It is easy to grasp the point of any given technique and apply it without much difficulty. This would be an ideal book for anyone serious about martial arts, whether they’re newbies or veterans. And for those who may be sliding into a numbing rut in their martial arts style, this volume will likely refresh and rekindle a renewed interest. This paperback is a keeper; get a copy as quick as you can!