Renaissance: The Power of the Gospel However Dark the Times by Os Guinness; a Review 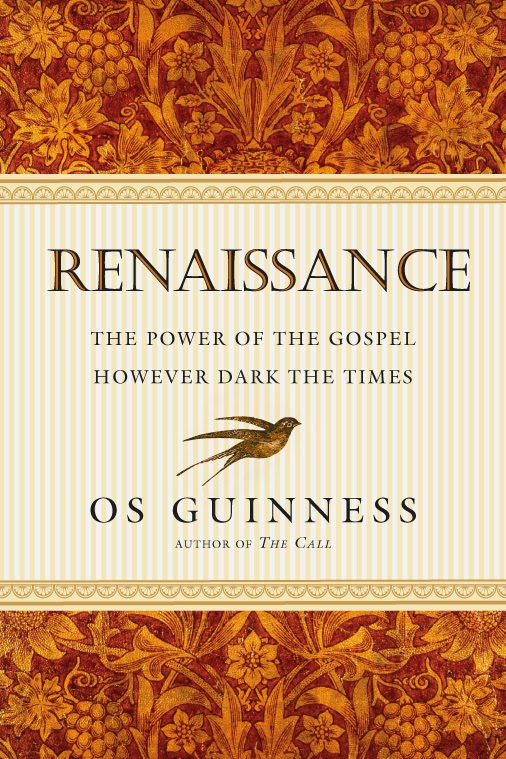 4 Stars out of 5
Re-ignited Resolution
Some years back a fellow church leader quipped to me, “It feels like we are standing alone facing a spiritual tsunami!” It was a poignant statement, since it was just after the December 2004 tidal wave that hit Malaysia. His point was made. In the Christian Church in North America and throughout the West, on the left and the right, amongst progressives and pedants, it appears that more and more churches, ecclesiastical leaders and denominations have slipped their dock lines and drifted away from their moorings. On top of this, the social and political temperature has become increasingly frigid toward Christianity and Christian mores; with civil leaders, educators, mass media and health professionals progressively throwing overboard anything that smells restrictive and chauvinistic. Who is to blame? How could these things have happened? Is there a way to “wake up, and strengthen what remains and is about to die” (Revelation 3.2)? Os Guinness (D.Phil., Oxford), prolific author or editor of more than thirty books, frequent speaker and prominent social critic, a founder of the Trinity Forum, onetime visiting fellow at the Brookings Institution and guest scholar at the Woodrow Wilson Center for International Studies, looks to answer these questions and more in his new, 192 page, paperback, “Renaissance: The Power of the Gospel However Dark the Times”. Guinness writes from within the Evangelical arm of the Church, and for her renewed well-being.
“Renaissance” moves along in six chapters and a postscript. Each chapter can stand alone by itself, but also works well with the succeeding ones.  Guinness’s core theme is simple, straightforward and promising, “Let there be no wavering in our answer. Such is the truth and power of the gospel that the church can be revived, reformed and restored to be a renewing power in the world again. There is no question that the good news of Jesus has effected powerful personal and cultural change in the past. There is no question too that it is still doing so in many parts of the world today. By God’s grace it will do so again even here in the heart of the advanced modern world where the Christian church is presently in sorry disarray” (14). The whole work is given over to supporting this bold claim, as well as proposing the steps necessary to bring it about. But those suggestive steps have far less to do with technique or technicalities, methods or maneuvers, and more to do with the biblical message of returning to the God and Father of our Lord Jesus Christ. “Renaissance” is more a book of confessing our faults in the bleak predicament of the West and the Church, re-igniting our allegiance to Jesus Christ, and moving forward with courage and hope, no longer bowing before the idols of prestige and prominence; “The time has come to trust God, move out, sharing and demonstrating the good news, following his call and living out our callings in every area of our lives, and then to leave the outcome to him” (148).
Throughout this work, Guinness brings historical and social insights to bear so that the reader may become more discerning of how we got to this point, and why it all matters. Though he is clear about the social pressures pushing hard against the Church, he is even clearer on the many ways we (the Evangelicals to whom he is writing) have caved in on ourselves long before those social pressures pushed! As the author states, “Evangelicals little realize how much they have become the spiritual smiley button of suburban America” (85).
The weakest part of “Renaissance” is the final segment that explains and republishes “An Evangelical Manifesto”.  The content is similar to what has already been addressed in the book, showing obvious signs of Guinness’s influence on its writing. It is worth reading and instructive, but it is longwinded and lumbering.
One of the beautiful strengths of the book, personally, is the well-written, heart-felt prayers that concludes the six chapters and post script. Each prayer grows out of the chapter it is appended to, guiding the reader to make the chapter’s content their own before the face of God. I have been using some of these prayers in my personal devotions, and think that they are definitely fitting in public worship.
“Renaissance” is a timely work written by a perceptive author with a passionate heart for Christ’s Church, especially in the West. This book is nicely set up with concluding questions at the end of each chapter to guide congregational leaders and reading groups into fruitful discussions. The importance of this book is such that I eagerly recommend readers dash out and obtain immediately.
My thanks to IVP for the free copy of “Renaissance” used for this review.


[Feel free to publish or post this review, but as always, please give credit where credit is due. Mike]
Book Review Os Guinness Renaissance