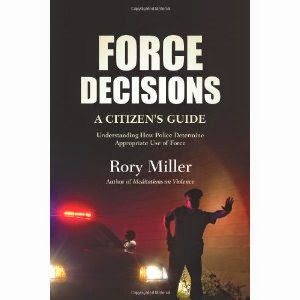 5 stars out of 5: Forcefully Forthright

In the face of so much print and electronic media coverage on actions of police officers, it appears that law enforcers are always overstepping the line. The almost automatic assumption is that cops abuse power at almost every step. They’re assumed guilty until proven innocent, and the supposition is that they will not be proven innocent because they pulled a trigger, tasered someone, shed blood, or broke bone. In fact, in the court system a police officer’s testimony is no longer accepted as having more weight of truthfulness than the person being tried. As an aside, my own personal principle, that an officer’s testimony is to be accepted as true unless proven false, has gotten me kicked out of numerous jury selections. Into this socially charged atmosphere comes a 206 page paperback book that has the potential to bring sounder thinking to the front, “Force Decisions: A Citizen’s Guide: Understanding How Police Determine Appropriate Use of Force”. Rory Miller, a veteran corrections officer with years of police experience under his belt, has composed a well written document that walks the non-Law Enforcement reader through the different levels of the use of force. With loads of stories illustrating his points, carefully composed chapters, and thorough explanations, Miller presents solid material that enlightens and helps the reader understand better the dynamics of resistance, violence and outcomes.

“Force Decisions” breaks down into four sections that guide the reader, step by step, to the place of making better informed decisions about a police officer’s actions. The first section describes the training an officer receives in the Academy. Most of the material appears to be Miller’s own lesson plans on “Use of Force and Decision Making, Police Defensive Tactics, and Confrontational Situation” that he has taught several times. It is engaging, energetic, and educational. The author’s premise in offering this information is that all “officers have been civilians; but few civilians have been officers. The civilians need information” (143). By the time a reader completes this section, they will never be able to read or see a news story about a Law Enforcement Officer’s actions in the way they did before.

The second, relatively shorter portion describes the checks and balances that are in place in case a use of force is suspected of being bad. The author guides the citizen through the process of how a case is decided; whether the officer is exonerated or the complaint is observed to be unfounded, unsustained, or sustained. In both section one and two, the bottom line is the crucial grid for both action and analysis: “You are expected and required to use the minimum level of force that you reasonably believe will safely resolve the situation” (4, 71).

The third, and largest segment of “Force Decisions,” is all about experience; how it changes, conditions and sharpens an officer’s perceptions and decisions. This particular part flows with abundant stories to illustrate the point, and the point is basically to drive home what was learned in the first two sections. Though this piece gels together nicely, it covers a whole host of new subject matter, like the contrast between the way a citizen things and a criminal thinks; the different types of officers; how knowing what to do does not always translate into doing; being confronted by those in an altered state of mind; and feelings of betrayal. The last bit of book limps its way to the end, primarily summarizing what has been taught and how it can be used.

“Force Decisions” is an important book intended to help the average Joe or Jane Citizen to understand how and why officers use force, and why they have no choice or only bade choices in many of the decisions made (161). I think that most readers, even those who routinely presume that an officer is guilty of abuse of power, will have their eyes opened, their perceptions widened and their prejudices minimized. I strongly recommend this book.

Thanks to YMAA Publication Center, Inc. for the free copy of the book used in this review.

(As always, feel free to publish or re-post this review; but please, give credit where credit is due. Mike)
Book Review Force Decisions Rory Miller

Barbara said…
This is an excellent review of Force Decisions-A Citizen's Guide:Understanding How Police Determine Appropriate Use of Force by Rory Miller. Michael Philliber says it well that citizens should read this to have a better understanding of our police and the use of force. There is so much "police force" in the news, that I hope others will read this book. And Rory Miller really knows his business, he's been there before.
September 10, 2014 at 11:04 AM