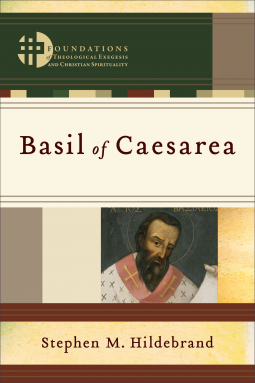 For many Protestants, especially Evangelicals, the early church pastors and theologians are something of a closed book. They sit at a far distance from the modern pressures and progresses, and appear to have little to say to Christians in the 21st Century. But there is a new move afoot that is attempting to retrieve our forbearers in the faith and make them accessible for Evangelicals, and one of the feeder-streams in the ressourcement rivulet is Baker Academic’s “Foundations of Theological Exegesis and Christian Spirituality” series, edited by Hans Boersma and Mark Levering. The third volume of this series has now arrived on the scene; the 224 page paperback, “Basil of Caesarea” by Stephen M. Hildebrand, professor of theology and director of the theology graduate program at Franciscan University of Steubenville in Steubenville, Ohio. Hildebrand’s installment will be of interest for seminarians, Church history professors, educated lay readers, and pastors.

“Basil of Caesarea” is something of a theological biography. Beginning with the first chapter, Hildebrand lays out the background and development of Basil’s thought and ascetic practice, which seem to begin with his paternal grandparents who fled from the persecutions under Emperor Maximus. They stayed in the mountains of Pontus for seven years, living frugally in the severe conditions, where “in piety and faith they cast themselves upon the mercy and bounty of God” (24). Basil’s parents continued this trend of domestic asceticism by their “gradual abandonment of the trappings and values of the secular culture in which they lived as they ever more thoroughly embraced the gospel and its social implications” (25). They seem to have gravitated toward the more Spartan forms of radical asceticism, at least in principle, as displayed in their befriending Eustathius of Sebaste. Basil, at an early stage, will come to embrace this ascetic trend, and will grow and develop it throughout the remainder of his life. In the rest of “Basil of Caesarea” Hildebrand unpacks several of Basil’s theological perceptions, but it quickly becomes obvious that each subject is colored by his ascetic context.

The author walks the reader through a discussion of the major theological categories he sees in Basil’s works. Chapter 2 deals with anthropology, the uniqueness of humankind, the distinction between the image of God and the likeness of God, how mankind can attain the likeness of God, and the place of the body. Hildebrand makes a telling observation with regard to the body when he notes that one “can gain insight into a particular theologian’s view of the body and its value and significance through that person’s teaching on the resurrection” (51). The author spends a considerable amount of ink making this clear.


In the third chapter, Basil’s understanding of the relationship of the two books of God – creation and Scripture – are presented. For Basil these are the two instruments by which God teaches and forms man. Yet, it is the second book that guides us in understanding the first. For example, creation reminds us of God as Maker and Artificer, but it is Scripture that brings us to understand this one God is simultaneously the Father, the Son and the Holy Spirit.

Hildebrand then moves, in the third and fourth chapters, to the subject of the Trinity. The third chapter lays out Basil’s statements about the Trinity outside of polemical debates. The fourth chapter examines how controversies with Eustathius and Eunomious honed Basil’s Trinitarian theology, making it clearer. The major point of the struggle seems to have come down here; “in the non-Nicene framework, the gap is between the Father and the Son, and in the Nicene framework, it is between the Trinity and everthing else” (106). In Basil’s perceptive view, to place the gap between the Father and the Son was to “compromise our access to God the Father and so ruin our very salvation” (114). For me, these were probably the most helpful chapters of the whole book.

The reader then turns the corner in the next three chapters and finds himself wadding through an overabundance of material on Basil’s conception of the ascetic life. It is in these three chapters that the author shows Basil’s view of two levels of discipleship: the normal, ordinary Christian life which teeters on mediocrity; and the intensely Christian “all-or-nothing” (138) life of the ascetic, and that “one cannot truly be a disciple of Jesus, one cannot keep all of his commands and so be pleasing to the Father, unless one lives an organized and formal ascetic life” (145). If the author is correct in his analysis, Basil was a commune-ist, believing and teaching that “there is no private property and no right to private property in authentic Christian discipleship. The goods of this world belong to everyone” (155-6).

“Basil of Caesarea” is a bit of a stiff work. For Protestants and Evangelicals seeking ressourcement, this book may be something of a flat tire on their retrieval-truck. Nevertheless, it will benefit most anyone who takes the time to labor over the material. The reader will likely find the discussion on the Trinity, and the emphasis on community of deep significance. To close, Hildebrand’s final sentence says much, for in “the end, Basil’s theology and spirituality converge into a single movement of the person –or rather, the human community—toward God” (216). I recommend the book.

Thanks to Net Galley and Baker Academic for the electronic copy of this book used for this review.

{As always, feel free to publish or post this review, and give credit where credit is due. Mike}
Basil of Caesarea Book Review St. Basil the Great Stephen Hildebrand