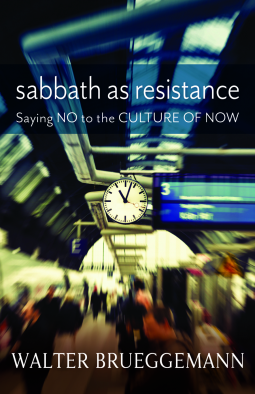 Stimulating Study - 4 stars out of 5

Almost no one talks about it anymore. Once it used to be a significant issue, especially in the Christian Church in England, Scotland and North America. But the whole subject of Sabbath has fallen to the wayside in all the rush for prominence, peace and prosperity. Nevertheless the matter of the Sabbath has significant implications for Church and society. Walter Brueggemann has taken up the topic in his newest 108 page paperback, “Sabbath as Resistance: Saying No to the Culture of Now” and takes the reader in an unexpected, but substantive, direction. “Sabbath as Resistance” is written to be grasped, comprehended and reflected on by both clergy and laity.

Brueggemann spends the first two chapters unpacking the Ten Commandments, showing how they were given by Israel’s God as a way of being a people who can enjoy rest. Pharaoh and his production-affirming gods, were confiscatory, demanding “endless produce and who authorize endless systems of production that are, in principle, insatiable” (2). In contrast, Israel’s God “is on a collision course with the gods of insatiable productivity” (Ibid.). Into this conflict God steps in and delivers his people from the restless, anxiety-ridden world of Pharaoh. He brings them to Sinai and gives them his Ten Commandments. As Brueggemann works it out, the first three commandments are about exclusive devotion to YHWH and the last six are about loving our neighbor. The hub of these commandments is found in the one commandment that is the longest and most detailed: The Sabbath. It’s here, in the place of rest, that Israel finds it can breathe. And in being able to finally have room to breathe, Israel can love God (exclusively) and actually begin to love their neighbor. Sabbath is an act of trusting resistance to the constant, anxiety fueling demand to produce more, accomplish more, acquire more!

In chapters three through five, the author goes to three other portions of Scripture, Deuteronomy 5:12-14, Isaiah 56:3-8, and Amos 8:4-8. Simply put, Brueggemann lays out how Sabbath is resistance to coercion, exclusivism, and multitasking. These three chapters become drive-by glances at multiple passages (far more than the three listed) as the author attempts to show the social consequences of observing the Sabbath. Most times his case is made, at other times the reader is only left with invalidated assertions. Nevertheless, there is plenty of silage to chew over, and muse on for days!

The final chapter connects the tenth commandment with the Sabbath. It seemed to me that this chapter was the target Brueggemann was primarily shooting at. Here the author draws the connection that genuine Sabbath keeping and contentment go hand-in-glove. And, inversely, not recognizing Sabbath breeds avarice, “( . . . ) Sabbath is a school for our desires, an expose and critique of the false desires that focus on idolatry and greed that have immense power for us. When we do not pause for Sabbath, these false desires take power over us. But Sabbath is the chance for self-embrace of our true identity” (88).

“Sabbath as Resistance” builds a solid rationale for the social, ecclesial and individual value of Sabbath observance. There are weaknesses as well. The author’s acceptance of the documentary hypothesis, as well as conflict between Biblical books is disappointing. Also his section on inclusiveness (versus exclusiveness) seemed problematic simply because he appears to make unfounded leaps from the prophets to issues in the 21st Century. The biggest weakness I saw comes through in the lack of connecting the Sabbath observance of the Hebrew Scriptures, and Jesus' declaration in places like Mark 2:27-28, “The Sabbath was made for man, not man for the Sabbath. So the Son of Man is Lord even of the Sabbath.” If Brueggemann had spent time teasing out the connections, I believe the book would have been stronger, and the case sturdier.

All told, “Sabbath as Resistance” is an exceptional book. Bible study groups, pastors, elder boards, and denominational study committees need to work through Brueggemann’s material and wrestle with it. The author rightly maintains, “In our own contemporary context of the rat race of anxiety, the celebration of Sabbath is an act of both resistance and alternative” (xiii). This is a book I strongly recommend.