Book Review: "The Rise of Aredor" by Claire Banschbach 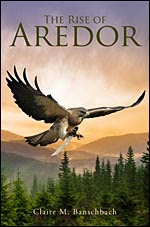 We love to read stories of redemption, restoration, rescue and rising from the ashes. These kinds of stories give us hope that no matter how bleak or desperate a situation might be, there can be a better end. Claire Banschbach has recently entered into the fantasy-fiction world with just such a story in her 324 page paperback, “The Rise of Aredor”, a work suited for teens and adults alike. This is Miss Banschbach’s first published story, and I’m certain the reader will see that not only is she a very talented author, but that she has a great future in the fantasy-fiction world.

The main character of the book is prince Corin of Aredor. The storyline falls into two main sections. In the first, the reader follows a young, ornery prince Corin to his kidnapping, being sold as a slave into the south country (Calorin), and his identity being changed to Hamid. There he firms up in body, determination and maturity under his cruel slave master, Lord Balkor. In the darkness of his brutal enslavement shimmering lights of kindness flicker as various characters do what they can to aid the boy. Finally, after several years, there is a chance encounter with a traveling band under the leadership of another Calorin noble, Lord Rishdah. Rishdah spies Hamid in his deplorable state, sees something of value in him, and strikes a deal with Lord Balkor to hand over the young man. Under Lord Rishdah’s attention, Hamid is cared for and trained as one of Rishdah’s personal bodyguard, the Phoenix Guard. Out of loyalty and gratitude for Rishdah’s kindness and trust, Hamid fights and fights hard. For three years he battles in dirty and dangerous situations, growing in friendship with the fellow members of the Phoenix Guard, and appreciation in the eyes of Lord Rishdah and Rishdah’s son, Ismail. It is during this time that Hamid learns that the Sultaan of Calorin has invaded, conquered and crushed his homeland, Aredor. After three years of grueling service, Lord Rishdah releases him from his oath and allows him to return to Aredor.

In the second part of “The Rise of Aredor”, Hamid secretly returns to his homeland, drops his Calorin name, and slowly begins to establish a resistance movement made up of old friends and members of the now scattered warbands. Corin finds that the Calorin domination is under the leadership of his old, cruel slave master, Lord Balkor, and this fuels a greater thirst to reclaim Aredor. The training he gained fighting for Lord Rishdah pays off, with several important successes. As the movement grows, its reputation increases, and it becomes known to friend and foe alike as “The Hawk Flight” under the leadership of “The Hawk.” I’ll leave the story’s ending for the reader to enjoy, but it is worth noting that there are several twists and turns in the plot line, with surprises and stresses.

“The Rise of Aredor” moves quickly, enticing the reader to turn pages, chew nails, and wonder what will happen next. It is a delightful read, and I found myself not wanting to put it down. I even handed it to both of my teenage sons who devoured it. My youngest son, upon completing the book, closed the cover and quipped, “Wow! That was good!” I highly recommend the book!

{Feel free to post and publish this book review, and as always, please give credit where credit is due. Mike}
Book Review Claire Banschbach Fantasy-Fiction The Rise of Aredor