Digging Daniel: Book Review of "The Message of Daniel" by Dale Ralph Davis 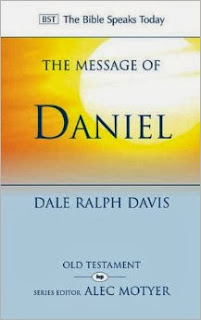 With a glut of printed, recorded and visualized material on prophecy, and all the hub-bub over failed end-times prognostications that has spilled into the media, another volume on a biblical prophetic book might receive a grimacing wince, or groaning incredulity. But Dale Ralph Davis’s new 176 page paperback, “The Message of Daniel” is a unique treatment of this Old Testament prophet that is devotional, homiletical, textual and thoughtful. This is part of “The Bible Speaks Today” series, and replaces the classic piece by Ronald Wallace.

Davis takes the position that Daniel was written by whom it claims to be written, during the period of time it claims to have been written; but he doesn’t spill gallons of ink on laying out all the pros and cons. After the brief, concentrated analysis in the introduction, most of the reasoning arises in short, thoughtful, and sometime humorous, footnotes throughout the work. Even if the reader disagrees, he will gain a new appreciation for the reasonableness of accepting Daniel as an original work written by a real, historical person (Daniel himself) during the actual time it maintains it was written (During the reign of Nebuchadnezzar, Cyrus and Darius).

In the Introduction Davis shows how the book is arranged, the first half recounting the deeds of specific actors, and the second half recording special visions. He also brings out the thematic flow, as well as the linguistic changes (Hebrew to Aramaic back to Hebrew). But again, the author doesn’t wear the reader down with loads and loads of highly technical verbiage. He highlights what is essential to know, and then moves on.

In “The Message of Daniel,” the author essentially follows the book of Daniel, from chapter one straight through to chapter twelve. He doesn’t work it out like a normal commentary, verse by verse, with tons of Hebrew/Aramaic syntactical-grammatical verbosity cluttering up the page. Instead, the material genuinely lends itself to serious devotional reading, as well as preparing preachers to pull together a sermon series on Daniel.

On a personal note, while reading through the commentary I found myself repeatedly stopping to pray and give thanks. There were one-liners, paragraphs and whole sections that pulled me up short, and re-awakened in me a sense of awe and gratitude. I also found myself worshipfully contemplating the section I had just read throughout the day, rejoicing over some aspect of God’s goodness, or working out what this or that might look like. I would say that most of the commentaries I have read over the years have rarely done any of this to me.

Dale Ralph Davis has crafted a useable, understandable, theologically solid work on the book of Daniel. Though the author writes from a particular eschatological position with which I might not fully agree, coming to conclusions on specific verses and sections I might not settle for, nevertheless this material is encouraging, rousing, and healthily sobering. Besides giving this book to your minister for his birthday or clergy-appreciation month, or using it in a Bible study gathering, this is a book that needs to be put into the hands of God’s people who are experiencing various forms of maltreatment and misfortune. The message of Daniel, and of Dale Ralph Davis, is meant to bolster faith and faithfulness; “If you are Jesus’ disciple, you are simply called to keep on going, to keep slogging on in your worship of Christ, to keep refusing to bow to the latest idol” (168). I highly recommend this book!

Mike
{Feel free to post or publish this review. As always, please give credit where credit is due. Mike}