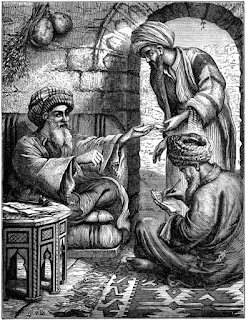 You’ll need to have a Bible and start in Luke 15.1 and follow on into chapter 16 (or open this link up in a separate window).

The Back Story
We must start clear back in Luke 15.1-3. There we quickly see the situation and the purpose of this section; “tax collectors and sinners were all drawing near to hear” Jesus (1). This irked the religious elitists, the Pharisees and scribes, who whined that “This man receives sinners and eats with them” (2). That whine is a beautiful statement in itself, though it was meant to be demeaning and dismissive. Because of that statement Jesus tells three stories “to them” (3), to the Pharisees and scribes.

The first is the story of the lost sheep, where the shepherd leaves behind the 99 and searches out the one who is lost. When he finds it, there is great joy and rejoicing, a celebration. “Just so, I tell you, there will be more joy in heaven over one sinner who repents than over ninety-nine righteous persons who need no repentance” (7). The repentant sinner in the story is the tax collectors and the “sinners” that had drawn near to hear Jesus. The righteous are the self-righteous religious elitists who don’t think they need any saving or any repenting because they think they’ve got their act together, just ask them!

The second story is about the woman who lost her coin. She hunts hard for that lost coin, and on finding it she too throws a celebratory party. “Just so, I tell you, there is joy before the angels of God over one sinner who repents” (10). Again, the “sinner who repents” is the tax collectors and “sinners” gathering in Jesus’ presence.

The third story is about the two lost brothers. The prodigal son (the tax collectors and sinners) comes to himself (17) and returns to the father and finds that he is received, loved, cleaned up, clothed, cherished and celebrated over, “For this my son was dead, and is alive again; he was lost, and is found.’ And they began to celebrate” (24). But the other son is the stubbornly self-righteous, the holier-than-thou, the “I don’t need saving” son who remains on the front porch where it’s dark, outside from the celebration and outside the father’s fellowship – thus here are the religious elitists, the Pharisees being invited in.

So these three stories are being told to the Pharisees showing why Jesus is eating with tax collectors and sinners.

The Punch Line
Now look past the chapter break and you will see that in 16.1-8 Jesus is still talking about why he eats with tax collectors and sinners. But here he turns to tell this story to his disciples, “he also said to his disciples” (16.1). Then he weaves a story about a plantation manager (or something like that) who has fallen short of his position, mismanaging his employer’s possessions (1). Seeing that charges rightly stood over him and he was about to receive his just reward, he immediately moves into action, shrewdly making deals and recouping what was being wasted. In other words, he starts acting like the diligent manager he was supposed to be all along.

This story is not about business practices, but about these tax collectors and sinners who have squandered their lives away, by being less than what God created them to be, but have now come to be with and hear Jesus, while the religious elitists stand at a distance and refuse to come to Jesus. So the punch line pops out with surprising brilliance (at least it was surprising for me!): “For the sons of this world are more shrewd in dealing with their own generation than the sons of light” (8). Who are the “sons of this world”? It’s the tax collectors and sinners who have now, later in life, come to their senses and by coming to Jesus are turning the corner. They are “dealing more shrewdly with their own generation” by embracing something of who Jesus is and flocking to him in droves. Whereas the “sons of light” are the religious elitists who seem to think they can hold Jesus at arm’s length, judging him self-righteously, not discerning the times and who this Jesus is. The sons of light don’t see their predicament that they too are like the manager wasting his employer’s possessions.

To wrap it up, Jesus tells four stories that explain what he’s up too in eating with “sinners” and defining the perilous position of the religious elitists.


In all of these stories Jesus is not only defending his reason for what he is doing, “receiving and eating with sinners”, but he is also putting the Pharisees and scribes on notice that their situation is precarious and perilous and he is opening the door for them to recognize that they too are lost, outside, and in need of “drawing near to hear” Jesus, just like the tax collectors and sinners.
Conclusion