Thoughts on "Body Broken: Can Republicans and Democrats Sit in the Same Pew?" 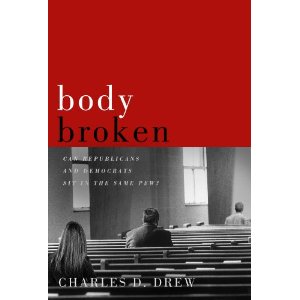 As the temperature begins to rise, and civility becomes a forgotten value in American political discourse, Christians have a serious obligation to re-assess their own approach to politics, elections, social issues, and the Church. It's in this regard that I recommend a new book, written by Charles D. Drew and published by New Growth Press, rightly and helpfully titled: "Body Broken: Can Republicans and Democrats Sit in the Same Pew?"

Drew has done a super job helping the reader to see the traps we get snared by, and how to avoid them, especially in light of the fact that Christians "have a sociopolitical identity that transcends whatever national or political alignment we have taken on" (43). His approach is clear, charitable, and thoughtful as he displays the principles by which we, Christians and churches, ought to think and act with regard to politics and important social-moral agendas.

This subject has long been in my mind as I have taught and preached through Galatians and Ephesians. In both Apostolic letters, the offending action that Paul seeks to remedy is the dividing of the church over ethnic, tribal and cultural lines. Political parties and political programs fit into this problematic mix as well.

The trouble is when we elevate the State, Legislative initiatives, and Elections to the level of the ultimate. By doing this in our churches, we take on a misplaced and wrongheaded allegiance. We begin to equate Christ's kingdom with faulty, compromised, scandalized political parties, or broadcast to unbelievers and pew-sitters this misguided idea.

Here's a test to gauge whether your congregation is part of the remedy or part of the problem: If the head of your local Democratic or Republican Party claimed to be a Christian, would they be able to worship in your church, take communion with the people of Christ there, and know they are hearing the Word of God proclaimed and not some party's "Talking Points"? Or would they quickly have to excuse themselves and exit because the "Elephant"/"Donkey" have co-opted the pulpit?

"Body Broken" is a valuable read for our churches, especially in 2012. It is even set up for group discussions by having "Making It Personal" questions at the end of each chapter. Again, I highly recommend the book.

[Here's a full book review that I did: http://www.seattlepi.com/lifestyle/blogcritics/article/Book-Review-Body-Broken-Can-Republicans-and-3507399.php]