"Fill the Earth" by Matthew Newkirk. A Review

Fill the Earth by Matthew Newkirk
My rating: 5 of 5 stars

Why in the world do Christians and churches support and get involved in missions? There are a handful of answers to that question, mostly revolving around saving humans or hastening the return of Jesus. But a few thinkers have pointed out that there are God-centered reasons for proclaiming the Gospel. Those God-centered motives include drawing peoples of every tribe and tongue into the worship of God; and proclaiming the reign of God over the cosmos. Matthew Newkirk, author, President of Christ Bible Seminary in Nagoya, Japan, and professor of Old Testament, has compiled a well-reasoned dossier on how the entire Bible “provides compelling rationale for the work of missions” (2) in his newly published 348-page softback, “Fill the Earth: The Creation Mandate and the Church’s call to Mission”. In this detailed manuscript the author hammers home the theocentric purpose of missions. As he states early on, “God’s mission in the world is for his kingship to be represented to the ends of the earth…the mission of God’s people is to fill the earth as God’s representatives and thereby demonstrate that his kingship extends over the entire earth” (5-6). The remainder of the book unpacks these assertions by a scrupulous and studious walk through the Bible’s story from the first chapter of Genesis to the end of Revelation.

Newkirk spends quite a bit of time showing how the creation and cultural mandate of Genesis 1:26-28 is deeply significant in God’s story. He demonstrates the manner in which “be fruitful and multiply and fill the earth” weaves in and out of the Hebrew Scriptures on into the New Testament. The author also brings out the ways Adam and Israel failed their mandate and how it was ultimately restored in the last Adam and renewed Israel, Jesus Christ. But between Genesis 1 to the first and final comings of Jesus, there’s more narrative and drama. Therefore, Newkirk skillfully undertakes to tease out God’s mission from Torah keeping to Temple constructing, and from Psalm singing to Wisdom expounding. It is quickly clear that he is a master of Hebrew and the Tanakh. A reader will be happily surprised, delightfully instructed, and thoughtfully motivated as they wade through these eleven chapters.

The author sees God’s original mission as centrifugal, expanding outwardly. But Adam fails and falls and is exiled from his original mission. Next, in the Mosaic covenant, God’s mission becomes centripetal, focused on centralizing around the Temple and the Torah. From this position of covenantal fidelity to Yahweh, the momentum will be attractive, drawing the nations to be amazed at the goodness and grandeur of Yahweh (Deuteronomy 4:5-8). But Israel fails and falls and is exiled from their mission and remains in virtual exile. Then, according to the author, with the coming of Jesus the last Adam and renewed Israel, who succeeds and saves, God’s mission is restored and relaunched in its centrifugal direction – ever expanding and escalating. The message now goes forth from God’s representatives, who demonstrate that his kingship extends over the entire earth: “The time is fulfilled, and the kingdom of God is at hand; repent and believe in the gospel” (Mark 1:15).

Though this outward-inward-outward motion in the unfolding of Scripture’s story is fairly obvious, I think there might well be something a bit different going on in the New Testament. I agree with Newkirk that Jesus’ first coming (re)launches the centrifugal direction of God’s mission: Pentecost and Paul make that certain. Yet the coming of Christ not only restores but transforms the mission of God. Not only is there an ever-present centrifugal movement, but there is simultaneously an equally centripetal direction. Almost every letter of the New Testament is written to congregations, to local sacred societies. They are never called upon to go out and expand the borders of God’s kingship. Rather, they are repetitively tasked with being attractive in their interpersonal relationships, godliness, flourishing in the fruit of the Spirit, and so forth. One of the results of this stay-in-place-attractiveness is that they can then support real missionaries out there, such as the church at Philippi did (Philippians 4:10-13). This durable and delightful book would have been made even stronger if the author had drawn out this two-fold movement in God’s mission, and how the tension is always healthy.

Nevertheless, Newkirk’s media parte in the book comes forth brilliantly when he states that mission “existed for the sake of God’s kingly glory before there was any need for human salvation. By viewing mission this way, we see that the work of missions is first and foremost an extension of a creation ordinance, rather than a redemptive ordinance. That is, missions is fundamentally a proactive endeavor aimed at representing God’s kingship to the ends of the earth rather than a reactive response to the presence of sin in the world” (270). I think the author has hit the mother lode that puts the Bible’s storyline together handsomely, and gives muscle and mass to why we do what we do in missions, evangelism, and church!

“Fill the Earth” is the book! If you’re serious about missions, then this volume is the place for you to camp out for sober reflection. Pastors, Evangelists, Chaplains, Missions Committee Chairpersons, seminarians, seminary Professors and Denominational moguls must take up this book and delve into its meaty depths. I highly and happily recommend this work.

My thanks to the author who alerted me to this book, and to Wipf & Stock for sending me the review copy I requested. I received no pay, nor any dictates on what to say. This evaluation is all mine, freely made and freely given.

View all my reviews

"Why Social Justice Is Not Biblical Justice" by Scott David Allen. A Review 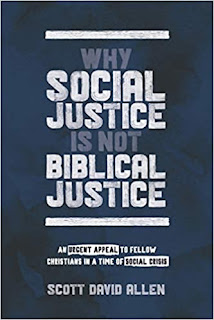 You can feel it in the air and taste it in the water. Something is afoot, and it’s hard to put your finger on it. Like a virus spreading from community to community, it seems to be creeping along and then suddenly come the symptoms of infection, and one wonders where they picked it up from and how to shield their loved ones from it. Scott Allen, president of the Disciple Nations Alliance and author, has sought to diagnose the ailment and how it spreads in his 256-page paperback “Why Social Justice Is Not Biblical Justice: An Urgent Appeal to Fellow Christians in a Time of Social Crisis”. This very accessible work presents a map through the various ideas and types of justice without getting lost in juridic language. Since “Why Social Justice Is Not Biblical Justice” is endorsed by Wayne Grudem and has received an abundance of reviews and analysis from others, including Tim Challies, I’ll leave the details to them. I found the book strong in definitions, distinguishing between variou
Read more

"A Field Guide to False Teaching" from Ligonier Ministries. A Review 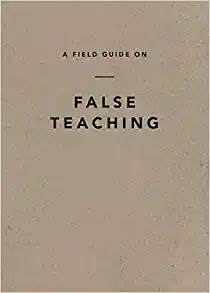 This little field guide is just that, a pocket-sized field guide, clothed in military manual like colors. Perfect for carrying around and keeping close at hand. It was handed out for free at our denomination's General Assembly-2021, and I found it useful. Not deep, not weighed down with loads of details. Rather, it's just the right amount of information written in a brief style so that young Christians and others will be able to use it. The book, published by Ligonier Ministries (no author is credited), covers false teaching and cults inside and around Christianity, as well as completely other religions and worldviews outside Christianity. Ideal for an upper school, teenage class. i highly recommend the work.
Read more

"Beyond Order: 12 More Rules for Life" by Jordan B. Peterson. A Review. 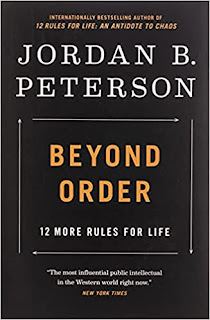 Funny how Christianity has been saying most everything Peterson is now saying. We get judged as demeaning and judgmental, while he gets praised and promoted. No problem, though. Peterson speaks the language of the "nones" and comes at his subject through his study of psychology, experience, wit, and wisdom. And with "Beyond Order" a reader gets four for the price of one: psychological observations, cultural analysis, philosophical ponderings, and sage, fatherly direction. It's not a light read. Each chapter varies from 20 to 50 pages of dense reasoning and reflection. But one gets their money's worth. And as a Christian I must say that though Peterson is not one of "us" he is not far from the kingdom. Though it does seem to me (religiously) he keeps circling around Gnostic trends and aspects. Yet he comes to stand up and defend that which flows through Christian Scripture, theology, and ethics. Hard work, truthfulness, evil runs through all of us
Read more